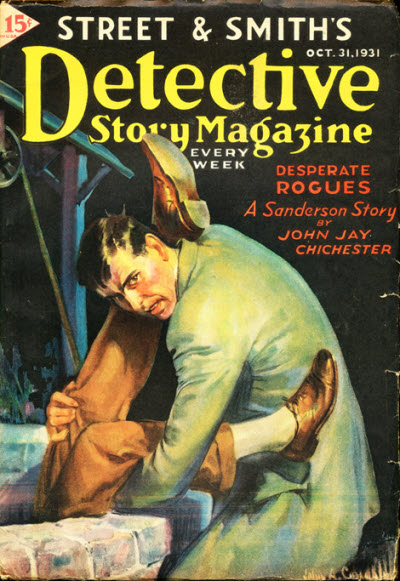 Let's close out October with this mildly gruesome if not scary 1931 Detective Story cover by John A. Coughlin. John Jay Chichester's Maxwell Sanderson, who made his debut in 1925, is one of those gentleman thieves (his nickname is "The Noiseless Cracksman") who often turn up in detective pulps. Sanderson regularly earned Detective Story covers from 1926 onward, though there were periods when it wasn't clear whether the weekly cover was illustrating any particular story. Chichester would follow "Desperate Rogues" with a Sanderson serial in December, but after this issue Sanderson apparently lost favor. It's not clear whether Chichester wrote any more stories about him until 1934, and Sanderson seems to have been retired for good in 1935. This issue also continues a story written under Chichester's real name, Christopher B. Booth. The rest of the authors are the usual now-obscure lot, though I wonder who Asia Kagowan was.  Kagowan wrote regularly for Detective Story from 1930 through 1935, including a series about a character named Pooglesnup. Before that the name turns up in the old Life humor magazine of Roaring Twenties fame as its Chicago correspondent. Beyond that Kagowan's identity seems to be as much a mystery now as any solved in this issue.
Posted by Samuel Wilson at 1:00 PM