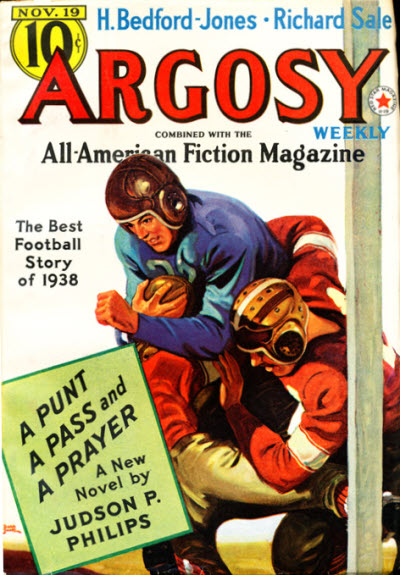 This was Argosy's annual football cover for 1938. Judson P. Philips invented the tradition in 1934 and wrote the annual serial through 1940, except for 1936 when George Bruce did it. Apparently Philips discovered a market or else this wouldn't have become a tradition. For those unimpressed by sports fiction this issue offers H. Bedford-Jones' "Cleopatra's Amulet," a serial installment by Eustace L. Adams, a novelette by Robert E. Pinkerton, short stories by Paul R. Morrison, Jack Paterson and Richard Sale, and part of Argosy's reprint of A. Merritt's The Ship of Ishtar from 1924. This reprint marked the start of a distressing trend that continued with a reprint of John Buchan's The 39 Steps at the end of the year.
Posted by Samuel Wilson at 6:13 PM