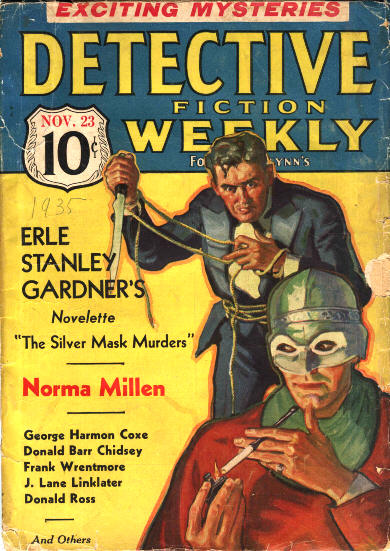 Apparently someone is going around murdering men in silver masks. Or maybe people are being killed with silver masks. The title of Erle Stanley Gardner's 1935 novelette suggests one or the other, and the cover definitely does not convey that the Man in the Silver Mask is committing the murders. Well, I'm sure someone 81 years later knows what really happened. This issue is heavy on series characters, by the way, including Donald Barr Chidsey's team of McGarvey and Morton, Charles Anderson's Indian John Seattle and H. H. Matteson's Ho-Ho Stevens. There's also a novelette by George Harmon Coxe, the continuation of gun moll Norma Millen's memoir, short stories by Maxwell Hawkins and J. Lane Linklater and the penultimate installment of Donald (Fred MacIsaac) Ross's The Eye of Isis, plus the usual columns. Looks like a pretty good issue overall.
Posted by Samuel Wilson at 12:32 PM