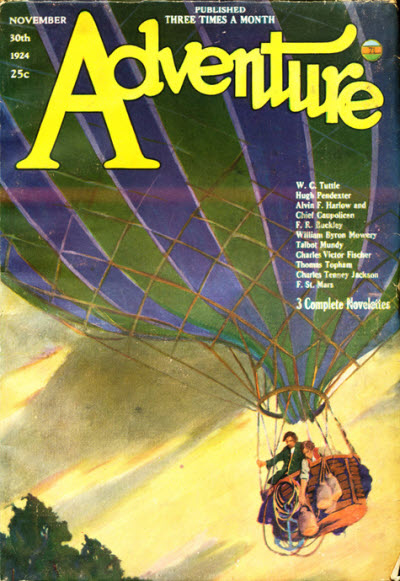 Richard H. Rodger's nice balloon cover gives this 1924 Adventure a sort of cover banner that contrasts nicely with the sky below. Inside, this issue features two of Adventure's longest-lived characters. W. C. Tuttle's Hashknife Hartley started in Adventure back in 1920 and mostly stayed there for 15 years. He continued in other pulps, especially Short Stories, until 1951. F. R. Buckley's Luigi Caradosso actually makes his debut this issue in "Cartel to Wm. Shakespeare," and would stay loyal to Adventure to the bitter end of the pulp era. The Renaissance adventurer would take his last bow in March 1953, just before Adventure changed into a larger-format men's-adventure magazine. Talbot Mundy wraps a serial and Hugh Pendexter starts one this issue, while mainstays Charles Victor Fisher, Charles Tenney Jackson, William Byron Mowery and F. St.Mars, among others, contribute short pieces. This isn't my ideal issue of Adventure -- that would have some combination of Harold Lamb, Georges Surdez, Leonard H. Nason, J. D. Newsom, etc. -- but it's probably pretty good in its own right.
Posted by Samuel Wilson at 2:13 PM