In September 1932 Street & Smith's Detective Story went from weekly to twice-a-month. It had the same cover-date schedule as Short Stories, the 10th and 25th of each month, for the next three years. I thought it would be neat to show you all three November 10 covers that appeared before Detective Story went monthly in the fall of 1935, but the only version of the 1932 cover I could find online is damaged, and in any event it still resembled the cover format for the weekly, while in 1933 and 1934 we see significant changes. Here's November 10, 1933. 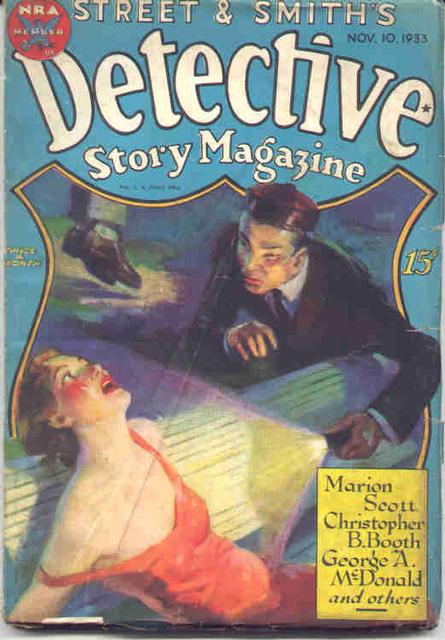 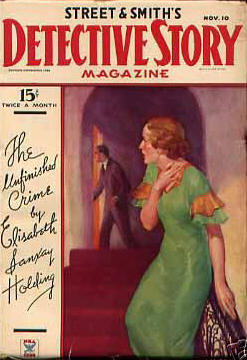 I can't say whether this amount of experimentation over a short time represents pure creativity or some kind of desperation as sales apparently declined. As it happens, the 1934 sample is the debut of a new cover format. The cursive copy on the side was used frequently though not consistently until the switch to monthly publication inspired yet another change in cover design. By comparison, Street & Smith's western weeklies and its hero pulps see relatively little variation in cover formats over the same period, with Wild West Weekly probably the most conservative in that regard. I guess they didn't need to shake things up in the same way.
Posted by Samuel Wilson at 1:18 PM