VINTAGE PAPERBACK OF THE WEEK: Norman A. Fox, THE DEVIL'S SADDLE (1948) 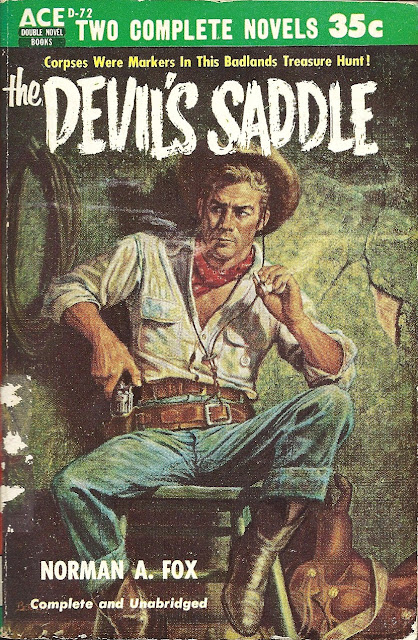 Flip your Ace Double Novel edition of Ralph R. Perry's Nightrider Deputy and you get a story very different in tone. It was my first encounter with Norman A. Fox, a well-regarded western writer who had several stories turned into movies, the best-known of those probably being the James Stewart-Audie Murphy team-up Night Passage (1957). Fox wrote The Devil's Saddle in 1947; it first saw print as a "book-length novel" (plausibly so, at more than 70 pages) in the January 1948 issue of Fiction House's Lariat magazine. It's one (if not the first) in a series Fox wrote, including at least two more stories, about the drifter adventurers Rowdy Dow and Stumpy Grampis. They're a pair out of the movies -- the B movies, that is. Rowdy Dow is admittedly a little more sardonic and smartassed than the typical B western hero, but Stumpy Grampis is your standard old-coot sidekick, though thankfully more in the Al St. John than the Gabby Hayes mode. As you notice no one getting killed during their action-packed exploits, you begin to think of Devil's Saddle as a rather juvenile story, but Fox's talent for writing action comes through just the same. 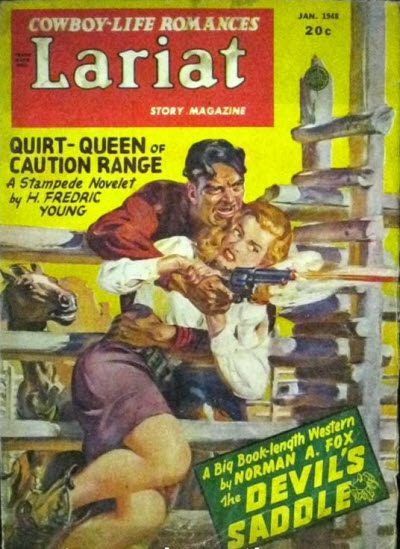 Relief from cabin fever comes for Rowdy and Stumpy in the form of a letter calling them to the town of Dryfooting inviting them -- Rowdy, to be specific, though Stumpy's inevitably going to come along -- to help a wealthy old rancher, Caleb Hackett, find a long lost treasure, Griffen's Gold. On the way to Dryfooting they witness a peculiar stagecoach holdup; the hooded bandits seem interested only in an old saddle, and are willing to risk lead from a girl gun-prodigy to get it. Our heroes are too far away to help with their guns, though they see a man in a checkered shirt come to the victims' aid, but they're in position to get in the way of the lead gunman's getaway. In a nice set piece, Fox disrupts our expectations of the old rope-across-the-road trick, but despite that failure Rowdy manages to get the saddle from the robber. He tries to get the girl's attention with it but has to duck lead when she mistakes him for one of the robbery gang. Figuring that the stage is on the way to Dryfooting, Rowdy figures that the smart play is to continue there himself and arrange for a safe return of the property to its owner.

We learn that the coveted "kak" is The Devil's Saddle, a prop in the magic act of the sharpshooter girl's grandfather. We learn later that a Devil's Saddle is referred to in a poem left to the rancher by Tennyson Tolbert, the poetic prospector who found Griffen's Gold with the rancher's tightfisted backing. Tolbert's doggerel promises clues to where the dead poet left the gold, but Hackett's foreman, Jake Kelhorn, found the letter and wants the saddle and the treasure for himself and his gang. Of course, the entertainers, Nathaniel Faust and Nan Bolton, don't know to make distinctions between Hackett and his men, while their checked-shirt ally, the Rimrock Kid, is wrongly regarded as a rustler by Hackett. Rowdy and Stumpy have to overcome the distrust of the good guys while fending off the bad guys and figuring out the real meaning of Tolbert's poem.

I admit a bias against comedy westerns, but were we dealing with Rowdy Dow alone Devil's Saddle would be a perfectly tolerable tale. The problem is that Fox lets Stumpy take over whole chapters of the story, first with a major subplot embroiling him in a romance with Dryfooting's battleaxe of a female sheriff, Catastrophe Kate, then later with a side trip to retrieve the journal of Griffen himself from a Montana museum, and finally -- and worst of all -- with a slapstick contrivance to bring a posse to rescue his besieged partner (and friends) by perpetrating mayhem throughout Dryfooting in order to stir up a mob. It would be one thing if we could see this happen as carried out by someone with Al St. John's slapstick talent. In prose it simply sounds childish, like having a comic book read aloud to you. Through all of it, I should emphasize again, it's clear that Fox is a good writer -- good enough that this sort of silliness seems like a waste of talent. I'm now eager to read one of his more adult westerns, and it so happens that I have one of those in my paperback collection. Look for my review of it here sometime in 2017.
Posted by Samuel Wilson at 12:00 AM