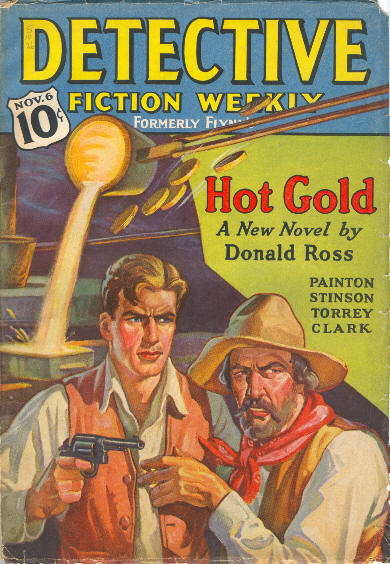 This 1937 issue looks more like Detective Fiction Western than Detective Fiction Weekly with that old prospector type on the cover. He's presumably a character in Donald Ross's (aka Fred MacIsaac) Hot Gold, though the setting is most likely more modern than he suggests. Along with the serial you get novelettes by Frederick C. Painton, Roger Torrey and H. H. Stinson and short stories by Dale Clark, Bert Collier and Samuel Taylor. I'd vouch for Painton but I don't know the other ones that well. There are plenty of DFW issues in the unz.org trove, most from 1936, but I haven't read those through as thoroughly as I have unz's Argosy collection. A project for another time, I suppose....
Posted by Samuel Wilson at 4:12 PM