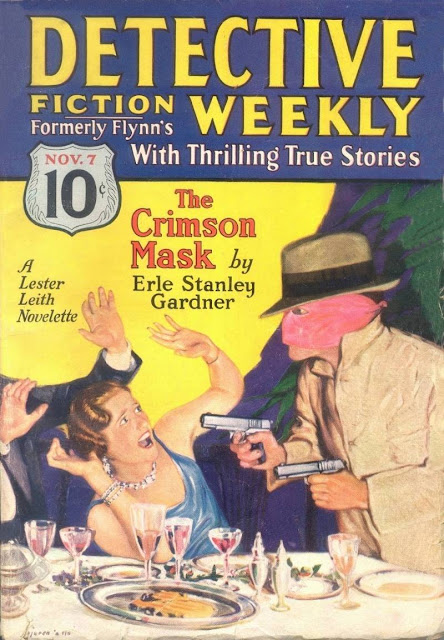 Who is that masked man? Is he a new hero or antihero for Detective Fiction Weekly? Or is it Lester Leith himself, Erle Stanley Gardner's hero who cons the cons? It looks like he's just another antagonist for Leith, a star character in DFW since 1929. "The Crimson Mask," from 1931, can be read by following this link to Evan Lewis's Davy Crockett's Almanack, where the story has been uploaded in its entirety. Gardner would continue to write Leith's adventures past his great breakthrough with Perry Mason, eventually taking the character to Street & Smith's Detective Story, where he got a big winking close-up at the end of 1938. An older but less active character in this issue is Arty Beele, the creation of Alexander and Ruth Wilson. "Cheap at the Price" is the penultimate story of a character who first appeared in December 1928, just two months before Leith's debut. Besides these characters, Fred MacIsaac continues his serial A Passport to Perdition while Ray Cummings, Stanley Day, Edward Parrish Ware and Russell Howells Watkins contribute short stories. The nonfiction pieces include Julien J. Proskauer's "Spook Crooks" column and Nelson Robins' "The Boy Executioners." Lejaren Hiller's covers from this period lack the pizazz of classic pulp, but this one definitely gets the point across.
Posted by Samuel Wilson at 12:17 PM