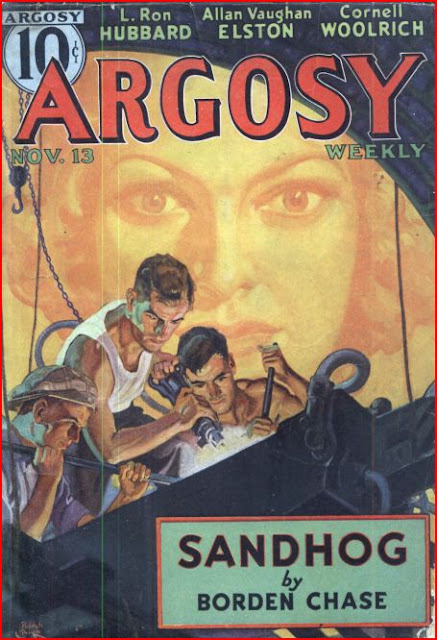 We think of pulp fiction as escapism, as fantasy, and yet for a while Borden Chase made a career in pulp as a chronicler of working-class life. Of course, the "sandhog" arguably was no ordinary working man, his work being possibly more arduous and dangerous than anyone else's, but the life of a sandhog could be no one's escapist fantasy. Chase's one-man sandhog genre, capped by the serial debuting in this 1937 Argosy, is an ironic analogue to the trend toward social realism in mainstream popular fiction -- ironic in the sense that social realism was largely a leftist phenomenon, while Chase would prove a rabid right-winger in Hollywood, where he wrote about cowboys, not sandhogs. 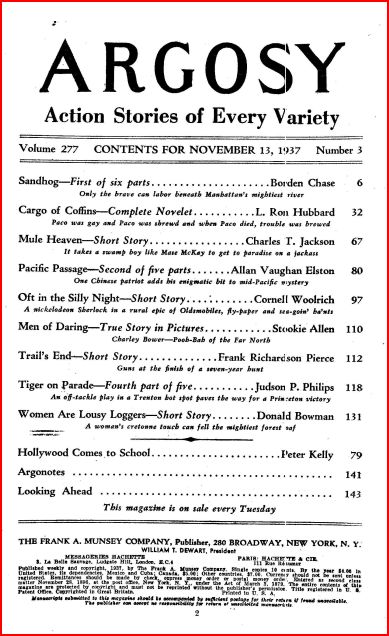 While the FictionMags Index doesn't have a table of contents for it, this issue has been scanned and uploaded to Yahoo's pulpscans newsgroup. It's a pretty prestigious lineup with L. Ron Hubbard and Cornell Woolrich in it, though the Woolrich is a comic trifle. The Hubbard is a fun tale of a Devil's Island escapee taking revenge on his crooked tormentor. There's also a western short by Frank Richardson Pierce, a Mase McKay tale by Charles T. Jackson -- with stereotype black dialect, but the hillbillies talk dialect, too -- and serial installments by Judson P. Philips (football) and Allan Vaughan Elston (shipboard mystery with a Polynesian detective). As usual, a decent selection of genres from when Argosy was still going strong.
Posted by Samuel Wilson at 1:35 PM