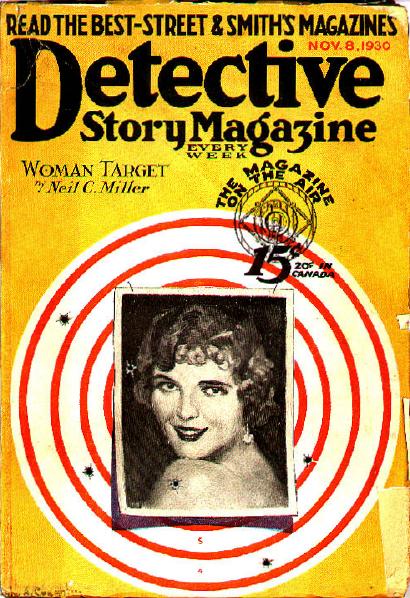 Here's a stark, simple cover design from a 1930 Detective Story, marred somewhat by the logo pushing Street & Smith's Shadow-narrated radio program. To some this may seem like an appropriate cover for this day in 2016, though they probably envision a different woman in the bullseye. Apart from the cover, the most noteworthy thing in this issue is probably the continuation of Black Star Back -- and How, the final appearance of one of Johnston McCulley's masked antiheroes. Black Star seems to have been McCulley's earliest series character, predating Thubway Tham and Zorro by a good margin. The author used a pseudonym, John Mack Stone, to introduce his gentleman thief in 1916, but decided to take credit under his real name by the end of that year. The war years and immediately after were Black Star's heyday. McCulley lost interest in him in 1921 but revived the character for a 1928 serial and, if the FictionMags Index is correct, a onetime appearance in Western Story the same week that the serial concluded. Back -- and How was the character's first appearance since then. Of the cover story's author, Neil C. Miller, I can say nothing except that "Woman Target" was his first Detective Story appearance since 1923, and that he would publish occasionally in Street & Smith pulps for the next decade.
Posted by Samuel Wilson at 12:40 PM