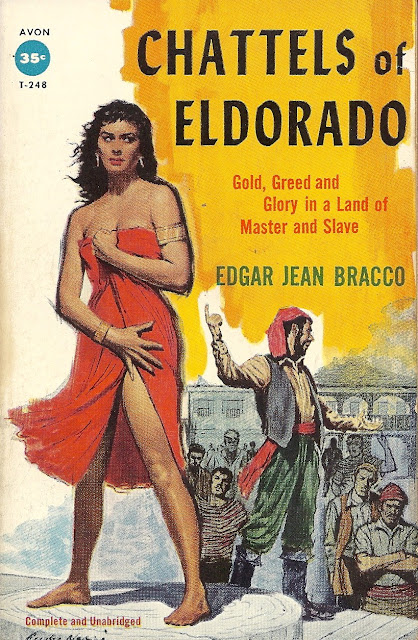 Rakehell is one of those once-common terms that has vanished from the genre lexicon. Even its abbreviated form, "rake," is little heard these days. If I'm right about this, it's probably because the rake has become less the exception than the norm in historical fiction, making a special label unnecessary. Sixty years ago a rakehell was understood to be a scandalous character, if still a hero, because he was a troublemaker by nature and, above all, a libertine, "reckless in battle ... a rascal in love," as this second paperback edition from 1958 describes Edgar Jean Bracco's protagonist. Whether that accurately describes Barron Carlisle is another matter entirely. 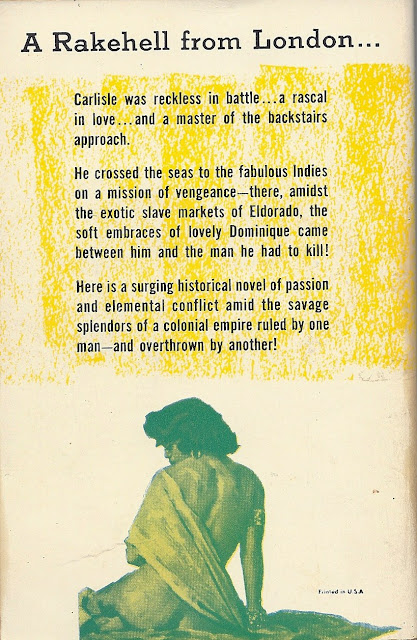 This spot illustration on the 1958 back cover was taken from the 1955 front cover.


Bracco (1920-2008) published at least once in the pulps (in Fifteen Western Tales) but spent more time in the slicks. He worked at McGraw-Hill as an editor and market researcher and in later life became a prolific feature writer for the wire services. He also wrote a number of movie and TV adaptations, according to his obituary. As far as I know Chattels of Eldorado is an original product of his imagination, even if it's a compendium of cliches for the most part.

We're first introduced to a lonely schoolteacher in 18th century Salem, David Stewart, whose chance choice of a tavern to dine in introduces him to Barron Carlisle, who steps in to held the game but outmatched David when flirting with the wrong serving wench gets him into a fight with the stock burly bully. When it develops that a British sailor has been killed in the ensuing brawl, Barron convinces David to flee with him to the Caribbean isle of Eldorado, where he has unfinished business with the trader Willem Van der Groot. Barron Carlisle is an avenger, having been framed for sedition and jailed for ten cruel years. We learn much later in the story that Van der Groot's men murdered Barron's father, and that Barron was framed to stop him from investigating the crime further. The one good thing that came of Barron's imprisonment was his friendship with Java Bentley, a physical hulk and an all-purpose fixer who secures emergency passage for Carlisle and Stewart, and himself as well. Java exists mainly to answer all the "how are we going to live?" questions that might otherwise slow the story down -- not that the story ever exactly gallops.

It becomes apparent eventually that Bracco doesn't have much of a plot in his head. Instead, Chattels plods along in episodic fashion over 217 pages. Barron and David land jobs in Van der Groot's commercial establishment and bide their time. Barron has no plan to sabotage or ruin Van der Groot; he seems only to be waiting for the right moment to kill his old enemy, and in the meantime Van der Groot's chief minion, the only man in Eldorado who knows the true identity of "John Barron," sends goons to kill the hero a few times, all in vain. He won't simply tell Van der Groot that Barron is his enemy because he assumes that the only way he'll get proper credit is by delivering a corpse to his master. Between assassination attempts, Barron befriends the oppressed slaves of the island and makes love to three women: Van der Groot's slutty niece Dominique, a kindly doctor's daughter, and the "voodoo queen" Africaine, who rewards our hero with sex for sparing her a whipping.

Bracco loses whatever interest he had in the revenge plot and has his heroes reveal their true heroic nature through their opposition to slavery. Barron befriends Senegal, an injured slave and makes him his personal servant. There are peculiar descriptions of Senegal's mighty musculature as he heals, just as there's a peculiar emphasis on male loneliness -- even Van der Groot suffers from it -- throughout the story. Thanks to his kind ways, Barron comes to be known as the Good White Man, while David, in a fit of sympathy, purchases Fernandina, a waifish, mute slave girl -- her tongue was torn out by a former mistress -- and makes a home with her as a sort of common-law wife. Where'd he get the money? Java, of course. Despite this subplot, David often recedes into the background of the story, even though the first chapter had set him up as our point-of-view character if not our protagonist. Most likely Bracco couldn't think of enough to do with him. Anyway, Barron's reputation as the Good White Man earns him a reprieve from Senegal, who emerges as the leader of a slave uprising. Barron has had a moral awakening on Eldorado and endorses the idea, except that he wants as few white casualties as possible. He comes up with a plan to have the slaves board a fleet of ships for Africa, and browbeats Senegal into sticking to it. " I promised you freedom," he tells the black man, "The only way you'll get it is by following my orders." Senegal's men conveniently kill Van der Groot just as Barron was doubting his purpose after revealing himself and boasting of his revenge. They also kill Dominique, but one of the killers shows a much-lacerated back to prove that the girl had it coming. One who definitely didn't have it coming was Fernandina, but she gets murdered anyway, first because one of the rebels resents her having slept with a white man, and second because in 1955 Bracco wasn't going to let an interracial couple live happily ever after. In fact, there isn't really any happy ending for anybody. Barron has enabled the doctor and his daughter to escape the uprising, but our hero finally renounces her in order to be a full-time anti-slavery fighter.

Throughout, Bracco struggles to be transgressive and probably succeeded for some of his original readers. My summary has underrepresented the amount of flogging that goes on, and I nearly forgot to mention a highly sexualized voodoo ritual involving Senegal and Africaine that Barron spies on. These episodes help keep us reading when we might tire of our rakehell hero proposing alternative inventory methods to the Van der Groot bureaucracy. They don't keep Chattels from being a bad novel, and may make it worse for some, but what we can say for it is that it's bad in interesting ways -- apart from Bracco's lapses in plotting and pacing -- that tell us more about the culture in which it was published and sold than about the 18th century Indies.