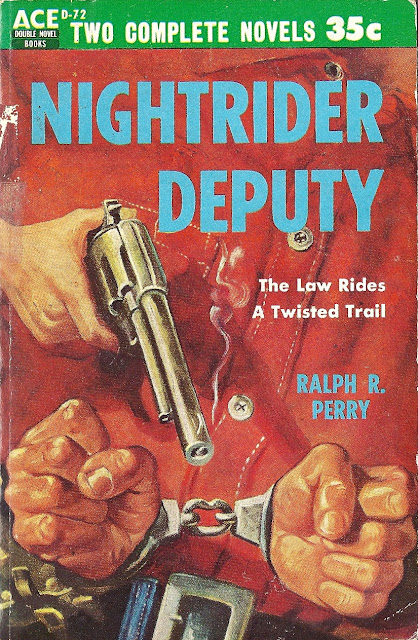 After Ralph R. Perry retired Bellow Bill Williams in 1936 he wrote a number of detective stories but eventually became a western specialist. He continued to publish in pulps sporadically in the 1940s and 1950s, publishing his last pulp story in the November 1953 Popular Western. The following year he published Nightrider Deputy as part of an Ace Double Novel set along with Norman A. Fox's 1948 story The Devil's Saddle. How many words made a novel remained uncertain in a business where "book-length novel" was often an unconvincing label. Ace offered a solution by offering two novels for one reasonable price of 35 cents. The novels started at either end of the book and converged in the middle. Flip Nightrider Deputy vertically and you can read Devil's Saddle from "front" to back. Each is a fair-sized novel by early paperback standards, Perry's clocking in at 154 pages, Fox's at 164. Nightrider is Perry's only novel unless you count the 1936 Argosy serial Filibusters Five. I can't attempt to explain why there aren't any more because I don't know when Perry died. Learning what I could of him, I found that he was a 1916 graduate of Columbia University, where he edited a monthly literary magazine. After serving in World War I he wrote a number of nonfiction articles for Atlantic Monthly and The Outlook. Obituaries of his daughter Mitzi Perry-Miller, an author in her own right who died last year, refer to Ralph Redman Perry as an author and educator, but I don't know where he taught. I suppose someone would have to open contact with the remaining Perry relatives to find out more about Ralph. You'd like to know why he stopped writing fiction, as far as we can tell, because Nightrider Deputy is an intense little story reaffirming Perry's mastery of the action thriller.

You can imagine Perry submitting Deputy to Ranch Romances for serialization, as a sort of romantic quadrangle comes to dominate the story. The main story is the attempt by Big Tom Parks, the rancher who dominates Toltec Valley, to destabilize rival ranchers by encouraging grangers to settle on their land. One such farm family is the Flandreaus, a sister and two brothers orphaned when their father is killed by train robbers. The sister, Sally, becomes the head of the family and presses on to occupy land used by cattleman Mat Karney, who dislikes grangers but feels sorry for Sally and her brothers and indulges them in their labors. Despite their tense first encounters Sally quickly falls for Mat, but he's out to win Nita Evans, the aloof but beautiful saloon girl who carries a full glass of beer and never drinks it to discourage people from trying to treat her. Sally and Nita become bitter rivals for Mat, and Mat has a rival for Nita in Tex Smith, who is the title character if not the main character of the story. Tex is a deputy sheriff but Big Tom has him under his thumb because he knows, as does Nita, that Tex is wanted for murder elsewhere, though the killing apparently was justified. This isn't quite a true quadrangle as Tex and Sally show no interest in each other, but it's a tense line of connections constantly prodded by the provocations of Big Tom and his gunmen. It's also complicated by the turn of the other Flandreaus toward violence as Karney's cattle impinge on their fences and crops.

The romance plots sort themselves out so that we end up with a quartet of heroes battling Big Tom, setting up a double climax as one couple makes an improbable hair's-breadth nighttime escape from a deathtrap and the other has a heart-stopping showdown with a cleverly concealed assassin. The only problem with these scenes is that they don't actually end the story, and Mat's final showdown with Big Tom is relatively conventional and anticlimactic, just as Big Tom's rather conventional villainy is Perry's one real failure in character development. Otherwise the novel's action scenes are recognizably the work of Bellow Bill's creator, highlighting Perry's eye for all the obstacles and handicaps people face in running combats. Perry's stories often read like ordeals rather than adventures for their protagonists, and the reader may feel that he or she has been through combat by the skin of the teeth alongside Nightrider Deputy's heroes and heroines. It's one of the most thrilling westerns I've read, and you get the impression that Perry put a lot of effort into it, however modest it looks in your hands. Maybe, in his fifty-ninth year, he was simply played out afterward.  Whatever happened, or didn't happen, Ralph R. Perry had graduated with honors from pulps to paperback originals, and you can't help wishing there had been many more of them.
Posted by Samuel Wilson at 12:00 AM