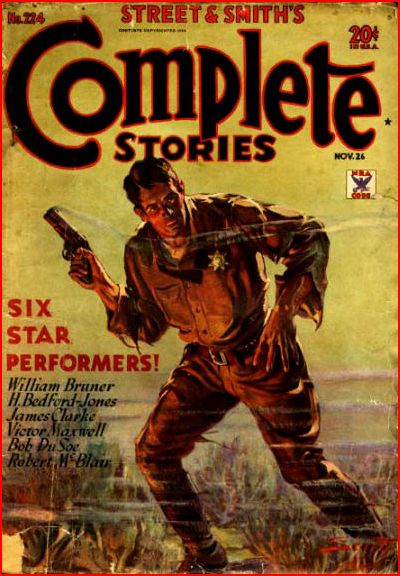 Street & Smith promises "Six Star Performers" in this 1934 issue of Complete Stories, but I don't know if modern pulp fans would grant anyone on the cover other than H. Bedford-Jones that honor. The author given top billing, William Bruner, rarely worked outside Street & Smith. He gets what probably passed for a book-length novel (it's 43 pages) while Bedford-Jones only contributes a short story. The authors not mentioned on the cover, C. S. Montanye and Carmony Gove, are probably at least as well know to pulp buffs as Bruner, James Clarke, Bob du Soe, Victor Maxwell or Robert McBlair. But they must have had their moments, or else why would Street & Smith think their names meant anything to anyone, and more than any story inside this issue? It just goes to show that pulp fame was ephemeral for many writers, and posterity often judged differently.
Posted by Samuel Wilson at 3:00 PM