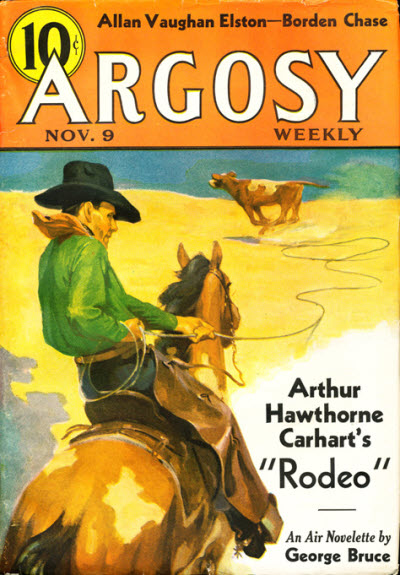 There's nothing special about this 1935 Argosy cover and I have nothing to say about the serial it illustrates. Instead, I direct your attention to George Bruce's novelette, "Black Ace." Bruce was an aviation specialist who twice had magazines named after him, so the idea of a black flyer was a high concept he was bound to get to inevitably. "Black Ace" sends a decidedly mixed message. It seems sincerely intended as an antiracist statement, with Bruce's assertion that, because Jefferson Rolfe was black, "the world lost a Clive, a Stanley or a Lindbergh," to be taken at face-value. Bruce makes this point even clearer in the story's second paragraph"

People who saw him laughed at him, until those people looked at his eyes. After that they found nothing humorous connected with Rolfe, and the laughter gave way to a desire to weep. To weep over this soul of a lion confined and condemned to pace restlessly within the inescapable cage of a black skin. Black skin made a cage, because Jeff Rolfe had the misfortune to be born into a white man's world, in which only white men can be heroes or heroic, and in which only white men can be leaders -- and in which white men zealously guard those prerogatives.


Going forward from here, however, you start to wonder whether Bruce was writing in ironic or mock-epic mode. Jefferson Rolfe proves to be a royal screw-up and something of a huckster. He fits a certain black stereotype of the time by wearing an over-gaudy version of a flyer's uniform. The story proper follows Rolfe's interactions with Ken Morey, war veteran and boss of the Ace Flying Circus, a barnstorming show that finds unexpected competition from self-proclaimed "Black Ace" Rolfe in Birmingham AL. Morey decides to co-opt the competition by hiring Rolfe to fly as a special hometown attraction in the Ace Circus. Morey's doubts are confirmed as it becomes apparent that Rolfe has no plane of his own and has never actually flown a plane, much less wing-walk as his own ads promised he would do. Rolfe turns out to be purely a book flyer, believing that once he read up on the subject he should be able to conquer the air on his first try. Instead, he damages two of Morey's planes, crippling one by botching a takeoff and nearly killing himself on the wing walk by putting his foot through the bottom half of the wing. In other hands this would be the stuff of racist comedy, but Bruce shows us that there's something different about Rolfe. The first thing that takes Morey by surprise -- and is never explained, perhaps for reasons of space -- is that Rolfe speaks with a perfect Oxford accent. The next is Rolfe's crazy courage, shown when, having bungled the wing walk, he follows through with a 500 foot parachute jump despite having never jumped before. Impressed by that gumption, Morey gives Rolfe flying lessons and discovers the man's limits. Rolfe has a sound theoretical understanding of planes and their controls, but is so "ground shy" that his every landing is a nail-biter. Having reached what he considers Rolfe's limit, Morey parts ways with him, only to encounter him again in New York, embarking suicidally on a transatlantic flight to Liberia in an obviously inadequate plane that thankfully fails before Rolfe is too far out at sea. Admitting shamefully that he was exploited by crooked promoters, Rolfe tells Morey that he was willing to fly the plane into the ocean to redeem his honor.

Morey next encounters Rolfe in Addis Ababa. Bruce informs us that the aviation industry forced flying circuses out of business, forcing Morey into the business of selling planes. He's in Ethiopia to sell fighter planes to Emperor Haile Selassie, though Bruce uses the ruler's now more totemic alternate name, Ras Tafari. Rolfe arrives there a ragged beggar, having tramped his way across the Atlantic and across Africa in search of some redemptive mission. On cue, Fascist Italy invades. In Bruce's account, the proud Ethiopian army is actually holding off the Fascists until Mussolini brings air power into play. Bruce portrays the emperor (Time Magazine's Man of the Year for 1935) as a stoic, fearless leader who is nonetheless helpless against Italian bombers -- until Jeff Rolfe appropriates one of Morey's fighters and earns his once-ridiculous title by wreaking havoc on a bomber fleet over the capital. He caps his crowded hour by making a perfect landing -- but Morey finds him mortally wounded. Rolfe dies having inspired Ethiopians to believe that they can stand up to the white invaders and all their technology, and Morey lives on to be haunted by dreams of the Black Ace.

This remarkable story and the entire November 9, 1935 Argosy are available at unz.org. There are two short stories and four serials, including the conclusion of H. Bedford-Jones' Bowie Knife and an installment of Borden Chase's Midnight Taxi, the debut of his cabbie-turned-G-Man Smooth Kyle, as well as Allan Vaughan Ellston's Eagle's Eye, about Tom Eagle, a hands-on New Jersey prosecutor who happens to be a Cherokee Indian. A lot of these look promising, even in partial form, but "Black Ace" is definitely the highlight of this issue. Follow this link to read it for yourself.

Posted by Samuel Wilson at 1:01 PM