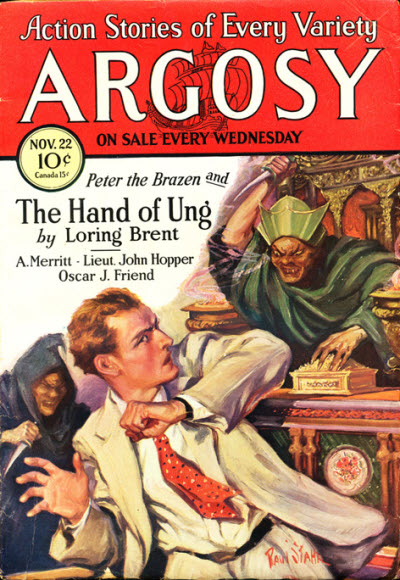 Pulp publishers often worried that their magazine covers would turn off potential readers embarrassed by their alleged bad taste. You could argue that this 1930 Argosy cover is pretty tasteless in its lurid portrayal of vaguely Asiatic menaces, but even if you did away with the imagery, as Argosy would do a decade later, you'd still be left with "The Hand of Ung." I can imagine someone being embarrassed to read something with that title, not because of any suspected meanings but simply because it sounds stupid. In any event, it's the start of a two-part adventure featuring Loring "George F. Worts" Brent's Peter the Brazen, so named for his complexion if not his attitude and so also called by some pulp's first "man of bronze," long predating the now more famous Doc Savage -- though "man of brass" may be more accurate in Peter's case. I can't find a table of contents for this issue anywhere, but I can report that it continues A. Merritt's fantasy serial The Snake Mother and Oscar J. Friend's western serial The Maverick, and concludes Don McGrew's pirate serial The Devil's Doubloons. And as the cover tells us, Lt. John Hopper has a story inside, perhaps having to do with his specialty of military sports. There's obviously more to the issue, but what else exactly is inside someone else must tell.
Posted by Samuel Wilson at 12:39 PM