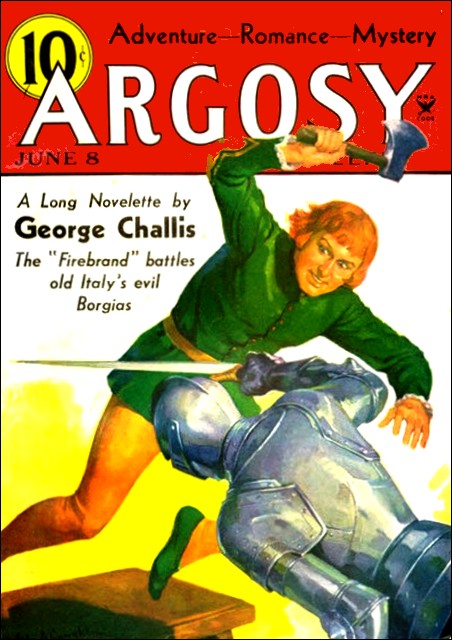 There's a copy of the June 8, 1935 Argosy in my personal collection but while that copy is in pretty nice shape overall the front cover is marred by a dealer's stamp, so I've taken an existing cover image off the net. John A. Coughlin's cover -- he did all the covers for Frederick "George Challis" Faust's Firebrand series -- illustrates a specific fight scene from "The Cat and the Perfume," the first of four long novelettes that wrapped up the series over the next twelve weeks. Tizzo, our redheaded hero, is about to bury his trusty fighting axe in a sweet spot in his armored enemy's helmet, after the antagonist has put himself off balance swinging wildly at our agile protagonist. This little fight to the death (almost) is staged by Cesare Borgia to test Tizzo's mettle. To bring newcomers up to speed, Tizzo, who had appeared in three short serials since the end of November 1934, is a half-Italian, half-English swashbuckler who has wrought havoc in parts of Italy and thus come to Borgia's attention. Cesare is too badass to be just plain "Borgia," however; he's "the Borgia," like a Renaissance Batman. As I've hinted, Tizzo passes the Borgia's test and is sweet-talked into joining Cesare's mission of uniting Italy. His English father is less easily taken in; the mercenary Baron Melrose can tell that Cesare's mission is less about Italy and more about the Borgia. Fearful that the old man will poison Tizzo's mind against him, Cesare takes a chance on poisoning Melrose while Tizzo is out carousing with the troops. He and his assassin Alessandro Bonfadini fail to reckon upon Melrose's stamina and smarts and before long Melrose, Tizzo and Tizzo's beautiful, brawling beloved Beatrice are battling their way out of the Borgia trap. Faust clearly loved Italy; he lived and worked there for some time and eventually died there as a war correspondent. His enthusiasm shows in Challis's Firebrand stories, which were later reprinted in book form and are still circulating electronically somewhere out there.

"The Cat and the Perfume" is all I've read of this issue so far, but let's see what else it's got: 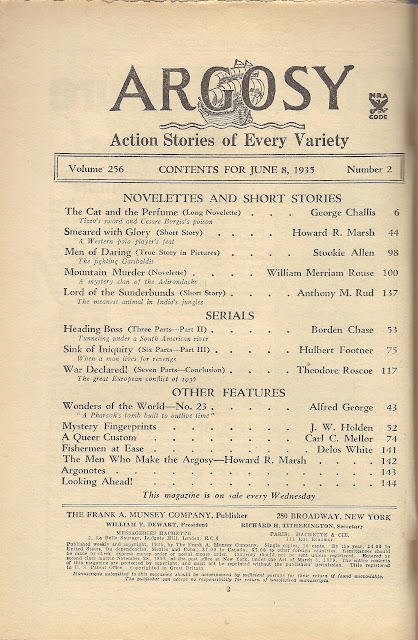 I can vouch for the two of the serials, all the earlier chapters of which can be found in the unz.org trove, which is fairly well stocked with 1935 Argosy. Both Hulbert Footner's Sink of Iniquity and Borden Chase's Heading Boss are set in Latin America, a popular playground of the pulp imagination in those days. I haven't read any of Theodore Roscoe's War Declared! yet but he's pretty trustworthy in this period. In shorter form, we get a polo story by Howard R. Marsh -- again, polo doesn't seem like the stuff of pulp until you factor in the ambitious dreams of its readers, polo being the sport of the virile rich -- as well as an animal story by Anthony M. Rud and a novelette by William Merriam Rouse whose setting falls somewhat close to home for me, but not too close. The following week's issue, which continues the Footner serial, concludes the Chase and begins F. V. W. Mason's Lysander of Chios, is at unz.org. The four following issues are in my collection. For now, the June 8 issue is sponsored by: 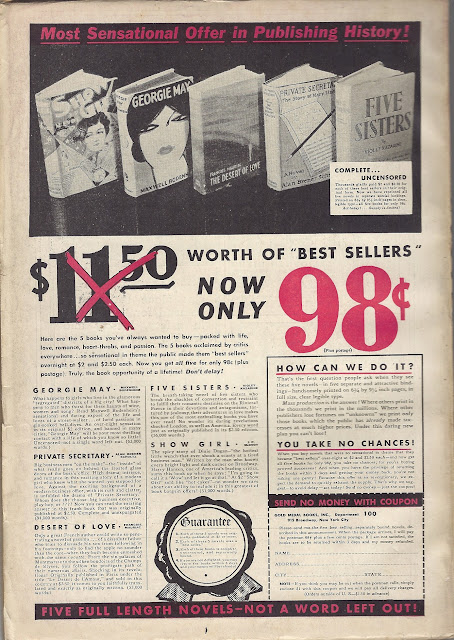 Posted by Samuel Wilson at 3:09 PM