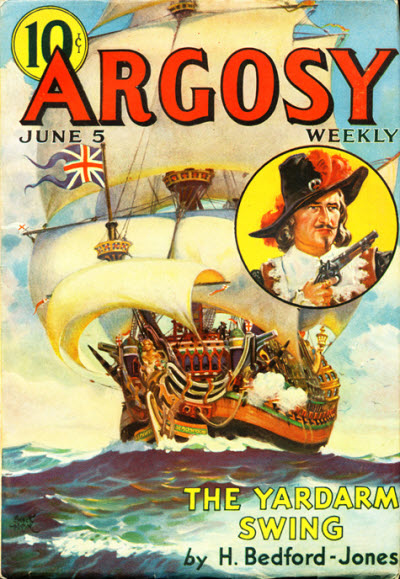 Emmett Watson's cover for this 1937 Argosy was a milestone event. That's not because of anything it portrays, including H. Bedford-Jones' lead novelette.  Since October 1920 Argosy was most easily identified by the red band on the top part of the cover that contained the logo, authors' names and the occasional slogan (e.g. "Action Stories of Every Variety"). With this issue the red band was gone, giving cover artists more space to work with. Watson seems to have been aware of the change and has designed his cover accordingly. The insides stayed the same in terms of layout and page count. During the desperate days of late 1941 the red band reappeared as if to reassure alienated readers, but it didn't stick around for long as the Munsey corporation continued to flail about in search of a saving idea. When Popular Publications took over in 1943 they once again restored the red band until carrying out a more lasting and successful revamp toward the end of that year. This issue has a pretty impressive lineup, including Bedford-Jones, Theodore Roscoe, Frank Richardson Pierce, Lester "Kenneth Roberson" Dent and L. G. Blochman. It gets more impressive once you recognize George Challis -- here doing a fantastic as opposed to his usual historical stuff -- as Frederick "Max Brand" Faust and if you assume that Martin McCall is really E. Hoffman Price.  The one unfamiliar name is Jean Francis Webb, whose "The Dragon's Shadow" was his Argosy debut after several years in the business, mostly in Street & Smith pulps. He wouldn't appear again until April 1944, after the Popular Publications makeover.
Posted by Samuel Wilson at 6:14 PM