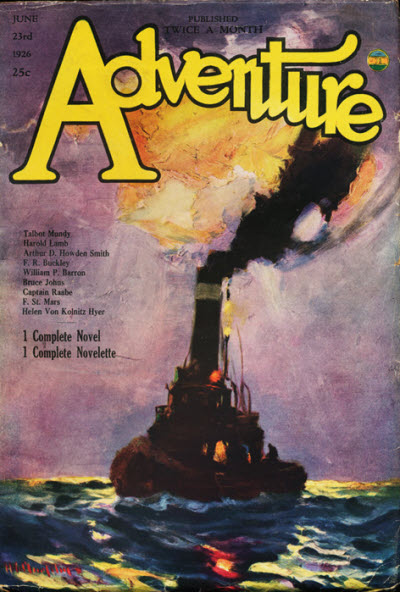 You get Adventure's biggest one-two punch in this 1926 issue as Harold Lamb adopts the memoir of Babur, the founder of the Mughal empire. Lamb, presumably following the convention of his day, calls the emperor Babar, but since that name came to be identified with an elephant the alternate spelling for the Mughal has become more popular. The other punch lands when Talbot Mundy continues Ramsden, his latest Jimgrim serial. Perhaps more auspiciously, after finishing a five-part serial in the previous issue, Arthur D. Howden-Smith embarks on a more sporadically published series tracing the history of the fated sword "Grey Maiden." I don't know if Grey Maiden is the first of the fated objects around which a pulp writer wound a series of stories -- readers of my series on Argosy circa 1939 at Mondo 70 may recall Philip Ketchum's series about they mystic axe Bretwalda -- but it most likely set the standard all the others aspired to. This issue also offers stories by William P. Barron, F. R. Buckley, Bruce Johns, Michael J. Phillips, the artist known as Captain Raabe, and animal story specialist (?) F. St. Mars, while Leonard H. Nason contributes a short nonfiction piece. It isn't as much of an all-star issue as the next one, which we may see early next month, but it could hardly be stronger on top.
Posted by Samuel Wilson at 12:00 AM