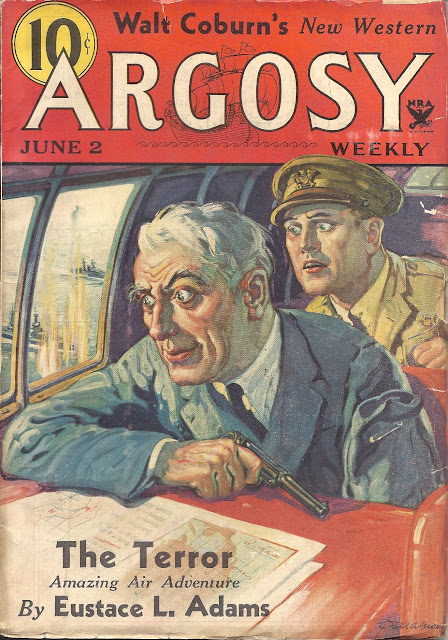 Here's another Argosy from my own collection. This 1934 issue begins a three-part serial by Eustace L. Adams, one of my favorite pulp writers. The Terror is a change of pace for Adams, a specialist in hard-boiled aviation stories. It finds him in apocalyptic mode, as if he were trying out for The Spider. The title menace is what we'd call today a terrorist rather than a terror. He commits mass murder with chemical weapons, including an attack on New York City, as part of a global extortion racket. In a detail that would have made Lon Chaney Sr. drool, the Terror isn't just missing an arm, as shown in Robert A. Graef's cover, but is also legless, requiring a giant minion to carry him around on his seaplane. I don't think Adams was really comfortable with the scale of the story, nor do things improve as the action gets confined to the seaplane with our heores and hostages. But for readers who identify pulp with the fantastic The Terror might serve as an introduction to Adams, if not an inducement to try his more rugged, realistic work. 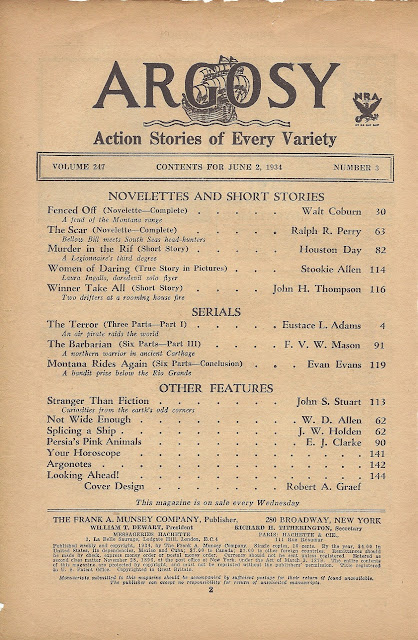 For me, of course, the main attraction of this issue was "The Scar," a Bellow Bill Williams novelette by Ralph R. Perry, which I'll discuss at greater length later this week. The other serials, F.V.W. Mason's The Barbarian and Evan (Max Brand) Evans's Montana Rides Again, are pretty good. The longest story in this number is Walt Coburn's Fenced Off, a typical range-war novelette noteworthy for including a heroic Chinese cook, though he'll be marred for modern readers by the inevitable dialect dialogue. Houston Day's "Murder in the Rif" is an amusing Foreign Legion story and a riff on the old pulp trope in which the white hero exploits native superstition to discover a murderer by inventing a magical test to expose the guilty party. Day appears to have been Sam Houston Day, a newspaperman and the brother of Dorothy Day, the famous Catholic social activist who has been proposed for sainthood. Houston Day's pulp career seems linked to his 1928 arrival in New York to join the staff of the Journal-American, where he became managing editor in 1941. Presumably he had grown busy enough already by the end of 1936 that his pulp career came to an end. A number of Who's Who type volumes from later in S.H. Day's career, as well as William D. Miller's biography of Dorothy Day, note that he once published fiction under the shorter version of his name. Finally, there is John H. Thompson, author of the comic Bill and Jim series about two "drifters," as this issues table of contents describes them. "Winner Take All" is a three-pager, a short-short by Argosy standards, in which one of the heroes tries to rescue their valuables, most notably a case of "Indian oil," from a burning rooming house, while the other makes good outside. It's short enough not to wear out its welcome. I'll reserve final judgment on this issue for my post on "The Scar," so stay tuned! 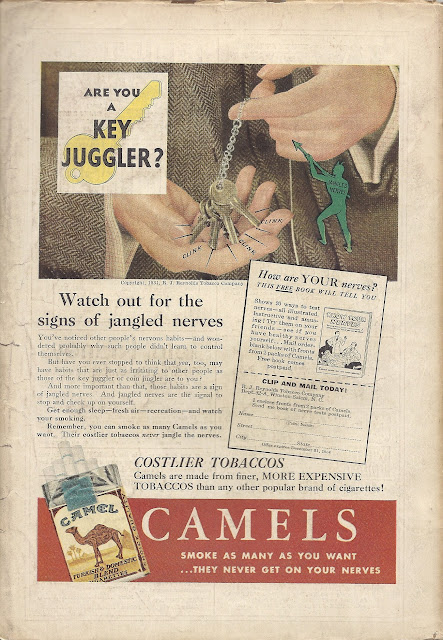