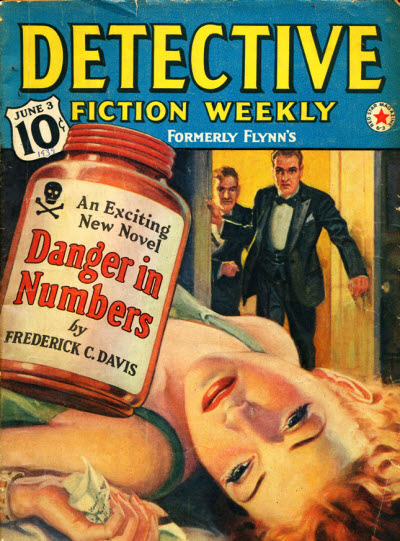 In 1939 Detective Fiction Weekly didn't have the stark elegance of the best Street & Smith covers, but the Munsey pulp had consistently creative cover designs just the same. I like the close-up foregrounding of the corpse and the floating pill bottle in the June 3 issue. The serial the cover illustrates is by Frederick C. Davis, who may be best known as the creator of the Moon Man, one of the more ludicrous looking pulp heroes, but I've read some decent adventure stories by him in Argosy circa 1941 so I suspect Davis will be on good behavior here in another Munsey mag. The only series character in this issue actually makes his debut. William Brandon's Ulysses S. Barr would appear in at least six issues of DFW between now and the end of September 1940, though most of them have the name "Maggie" in the title. Whether Maggie is a woman, a pet, or something else entirely I don't know. Dale Clark, Steve Fisher, William Edward Hayes and Lawrence Treat round out the line-up for this issue. It's not a classic DFW ensemble but at least the issue looks nice.
Posted by Samuel Wilson at 12:00 AM