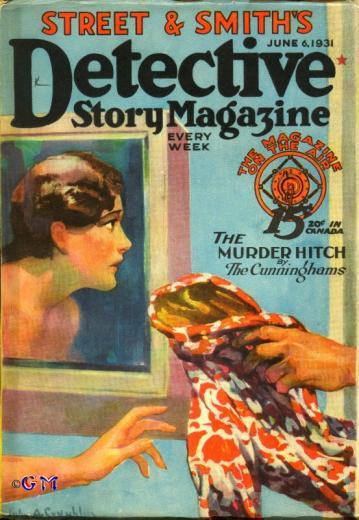 Here's a slightly suggestive cover by John A. Coughlin to a typical 1931 issue of Street & Smith's Detective Story. As often seemed to be the case, most of the authors published only or mostly in Street & Smith magazines. The cover story is credited to a husband-wife team (one of several in the mystery genre), The Cunninghams. After publishing four stories in Detective Story over the previous two years, their name apparently had become a selling point. They published five more stories over the next two years, never again receiving cover billing, before divorcing in 1934. William M. Cunningham was a leftist writer out of Oklahoma who wrote an early fictional treatment of the career of Pretty Boy Floyd and ended up a Washington D.C. correspondent for TASS, the Soviet news agency, while continuing to place stories in mainstream slicks like Collier's and Cosmopolitan. Another contributor of interest is C. Wiles Hallock, who was primarily a pulp poet. He made a good start landing verses in The Saturday Evening Post but published most of his work in western pulps. He published both prose and poetry in Detective Story, making me wonder what a detective poem looks like. He made his prose debut in February 1931 and landed a short story in Detective Story about once a month through the spring before his pace slackened. He remained a poet first throughout his pulp career, which extended all the way to the July 1952 issue of Adventure and some digest issues of Zane Grey's Western Magazine. It's remarkable to think that there was still a place for poetry in the pulps at that late date.
Posted by Samuel Wilson at 1:15 PM