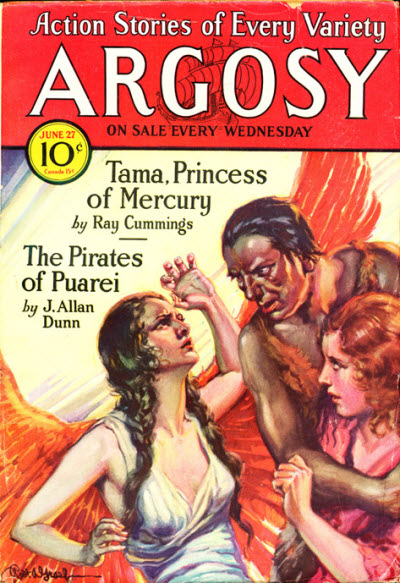 The star writer for this 1931 Argosy is Ray Cummings, who divided his talent between the fantastic and detective genres. Tama, Princess of Mercury, the serial premiering this issue, is a sequel to Tama of the Light Country, which had appeared in Argosy the previous year. In those simpler days Cummings imagined a barren but populated Mercury where the women, like Tama on this cover, have wings, though I understand the wings are clipped when a Mercurian (?) woman marries. In this serial some Earth folks who met Tama in the last story get involved in a war between the Light Country and the Cold Country. The concluding chapter is in the July 18 issue at unz.org. It shows that Mercury, or at least the Light Country, is progressive enough to let their females take part in war.

The girls started again. Fantastic sight! They fluttered up, giant birds with vivid blue and crimson wings; flowing draperies; braided hair fastened to their sides; white limbs gracefully poised. Formed themselves into the eight squadrons, each with its leader; and followed by the flying platforms, winged swiftly off into the gathering twilight.


That should be a sufficient example of Cummings' prose style. If that doesn't thrill you, the June 27 number includes another novelette in Erle Stanley Gardner's Whispering Story series of western detective tales, as well as a chapter of George F. Worts' serial The Grapevine Murders, featuring defense attorney Gillian Hazeltine, the pulp precursor of Gardner's Perry Mason. There are also serials by Jack Allman and J. E. Grinsted, a novelette by J. Allan Dunn, and short stories by Charles L. Clifford and Phil Richards. It looks like a typical 1931 lineup, though better luck might give you an issue with Robert Carse, Theodore Roscoe, H. Bedford-Jones or my man Ralph R. Perry. Still, Cummings aside, this one doesn't look bad.
Posted by Samuel Wilson at 3:04 PM