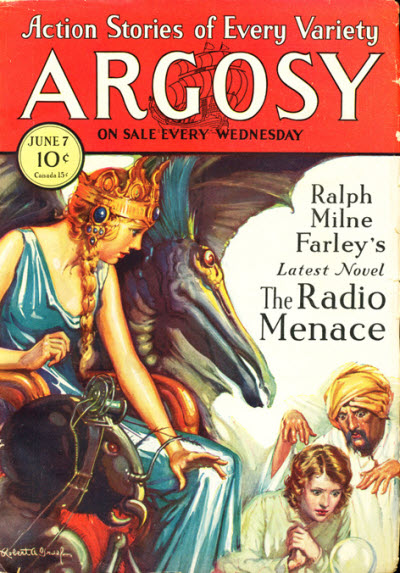 As Ralph Milne Farley, the sometime Massachusetts politician Roger Sherman Hoar was one of Argosy's star writers of the 1920s and early 1930s. Farley wrote fantastics, usually with a "radio" gimmick embedded in the title. Some of these formed a series following the exploits of the "Radio Man," Myles Cabot, who somehow transmitted himself by radio to the planet Venus, where the sentient beings communicate via "radio," transmitting thought waves through antennae at frequencies Cabot can reproduce with his technical know-how. Adventures in the Edgar Rice Burroughs mode ensue. The Radio Menace, debuting in this 1930 issue, was the latest of Cabot's stories. It appears to involve a queen or princess, a giant ant (presumably of the once-dominant species of Venus), a dragon and a swami putting the moves on a crystal-ball gazer. I've never read Farley's stuff so I can't judge what I'm seeing. However you feel about Farley, this issue has a formidable lineup, including Talbot Mundy, who sent a fair amount of stuff Argosy's way from 1928 through 1930 while keeping up his usual Adventure schedule, as well as Erle Stanley Gardner, Theodore Roscoe, former Adventure editor Anthony M. Rud (writing of the "Cajans," as they called Cajuns then), Kenneth Perkins (with the serial Voodoo'd), western writer Eugene Cunningham, Carl Clausen, and Hume Seymour in his only Argosy appearance. Overall it's probably worth a look.
Posted by Samuel Wilson at 12:00 AM