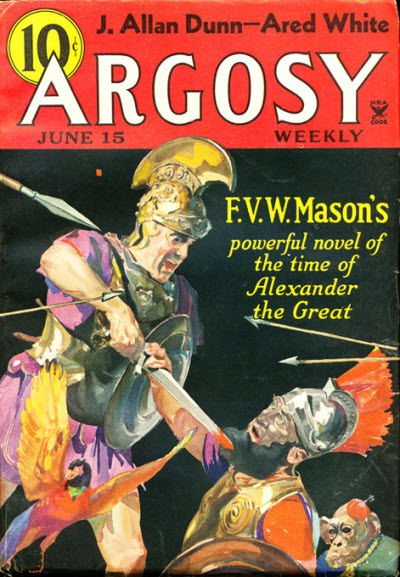 This 1935 Argosy is available for story-by-story download at unz.org. By this time F. V. W. Mason had been a star writer for the weekly for several years. His serials and occasional long novelettes were almost guaranteed to get the cover.  His "powerful novel of the time of Alexander the Great" is Lysander of Chios, later published in paperback as plain old Lysander. There's an almost mock-epic quality to this opening installment. Chios is a Greek island that has been ravaged and impoverished by generations of Persian attacks. Lysander, the young king, intends to send an expedition against Persia, consisting only of himself and the crew of his one humble warship. He's aided by the one-eyed Theban mercenary Conon and -- quite against Lysander's will -- by the runaway tomboy princess of Naxos, Kyria. The fight between Conon and Kyria, the two loose cannons, is one of this first episode's highlights. In grand pulp fashion Kyria is a legit warrior woman, if not quite Conon's equal in strength and combat cunning than at least a pretty devastating archer from what we see here. This little band will have plenty of room to maneuver, since the Great King will find himself preoccupied by Alexander's large-scale invasion. Mason gives his heroes more colloquial dialogue than you might expect in this sort of story, presumably befitting their small-time status. It freshens up the material, and the potential conflicts (and romance) among the characters makes you want to continue the story. It worked for me, since I now have the next four installments in my personal collection. You can go back to unz.org for the conclusion.

The long story this issue is J. Allan Dunn's "Goblin Trail." It's the sort of story people think of when they think of "pulp" in the pre-Tarantino sense of the word: fantastic to an increasingly delirious degree. You get the sense that Dunn is making it up as he goes along, piling up the crazy details.  A Mountie and his faithful Eskimo constable on a Grand Patrol encounter a degenerate Indian tribe performing barbaric rituals to exorcise devils. The Indians tell them of an "Evil One" lurking in the region "back of beyond." Our heroes begin to suspect that the Evil One is real when they find an old trader murdered. He is real, and like the villain he is he kidnaps the white girl of the story in order to make her his queen. Dunn diagnoses the case:

His dementia had doubtless been inherent, now arrived at the phase of 'ambitious' paranoia. a supreme and fixed belief in a noble destiny, a determination to acquire it that swept aside all obstacles. As with the subjects of most forms of paranoia, he was inclined to crimes of violence and extreme cruelty. his mind was diseased and could not be ministered to.

The hunt for the Evil One would be story enough, but you can understand if pulp writers start doubting whether they've put enough story into a story. And so, like King Kong fighting dinosaurs on Skull Island, the Evil One has to defend his captive from a lost colony of Vikings, and their lost colony is on the brink of destruction by eruption and earthquake. It all sounds nutty but there's something almost irresistible about the naive enthusiasm with which Dunn keeps adding to his tale. It makes up a little for the now-glaring racism of Dunn's treatment of the Indians. The heroic Eskimo fares much better, although Dunn, getting carried away, has a hard time keeping track of the way Ooingoot talks. He starts out talking typical pulp pidgin, but grows so much more articulate later that Dunn realizes he has to explain the discrepancy by noting that "on occasion" his English improves due to mission-school training. But for all Ooingoot's virtues, he and his kind are doomed to a social-darwinist destiny. "Soon they will be finished -- what you call washed up," he laments, and the Mountie can only agree, since "He felt that the advent of the white race inevitably meant the passing of the native. The two could not blend. Traces might linger. It was the survival of the fittest." Fittingly, Ooingoot sacrifices himself in the final showdown with the Evil One and the Vikings, though you can't help feeling he deserved better. As long as you know to expect this sort of thing going in, you'll find "Goblin Trail" appealingly goofy in its straight-faced, sometimes overwrought manner.

That leaves us with Ared White's novelette "The Courier from Spa," the sort of spy story in which he apparently specialized. White also specialized in this kind of writing: "Elton's quick aim had the element of calculating deliberation that a trained marksman, in contained possession of his faculties, measures into the veriest instant." That explains how he shot a guy. Despite White, this is a pretty strong issue when you add in the conclusion of Borden Chase's Heading Boss and  the continuation of Hulbert Footner's Sink of Iniquity. Hapsburg Liebe's "The Secret Room" has its heroes fend off a lynching bee; as usual in such stories the intended victim is white. And in Arthur Hawthorne Carhart's "Beginner's Luck" the heroes apparently fend off an avalanche. I'm not sure how Dunn forgot to put one of those in his story.
Posted by Samuel Wilson at 4:31 PM