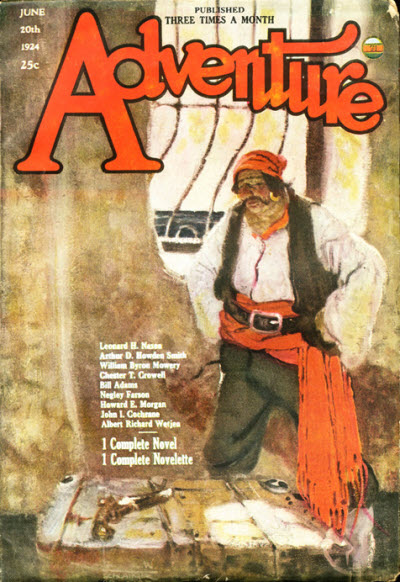 Again the twentieth of the month takes us to Adventure in its peak thrice-monthly years between the fall of 1921 and the spring of 1926. Which of the four June 20 issues from 1922-25 would I want to own? I'd choose this 1924 issue, first because of its Swain the Viking story by Arthur D. Howden-Smith; second for a story by Albert Richard Wetjen, one of my favorite sea writers; third for a story by Leonard H. Nason, expert at World War I stories and, as we'll see later this summer, period adventures. William Byron Mower is also a decent writer, while Bill Adams of "Slants on Life" fame gets a short story and a poem this time. I know less about the rest of the fiction lineup: serial author John I. Cochrane and short story contributors Chester T. Crowell, Negley Farson and Howard E. Morgan, but Howden-Smith, Nason and Wetjen are enough to sell me on this issue.
Posted by Samuel Wilson at 12:00 AM