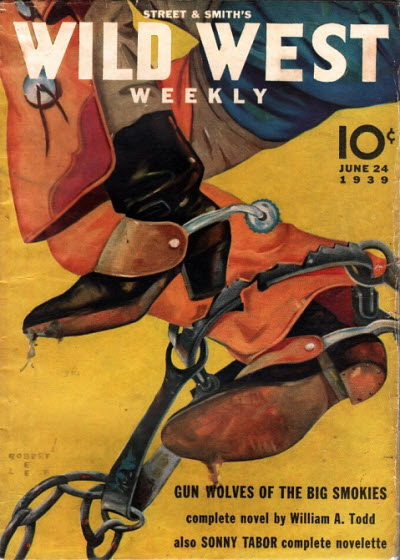 Most pulp readers probably wanted their magazine covers to tell a story -- specifically, one of the stories inside the magazine. For all that I admire the more symbolic Street & Smith pulp covers from 1939, I have to imagine that a lot of readers hated them, or at least didn't get them -- especially on a more youth-oriented pulp like Wild West Weekly. For instance: here's someone with his foot caught in a trap, courtesy of cover artist Robert E. Lee. Is this a scene from William A. Todd's complete novel? Could that be the ever-popular Sonny Tabor's ankle in that trap? Paul S. Powers had been chronicling his exploits for almost a decade by this point. Most likely a Street & Smith art director just thought it an eye-catching, abstractly dramatic image, and by my standard it's just that. But there has to be a reason why the publisher gave up on this style of cover before 1939 was over, though in the long view you notice that Street & Smith went through cycles of cover design. Anyway, this issue has a couple of series characters I haven't noticed or mentioned before. Blackstone Bangs was a heroic lawyer created by Allan R. Bosworth using the Dean McKinley house name, while Stephen Payne's Pole Pickett was making his second of eight appearances in a short career of five months.There's also a poem, a Pecos Wilson comic strip, and Fiddlin' Joe's Song Corral. They say you can't judge a book -- and by extension a magazine -- by its cover. That was probably more true for 1939 Street & Smith western pulps than usual.
Posted by Samuel Wilson at 12:00 AM