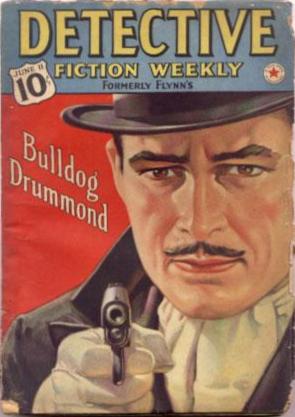 The cover says it all, but doesn't tell the whole story. H. C. "Sapper" McNiele's Bulldog Drummond presumably was so popular by 1938 that all Detective Fiction Weekly needed to do was put his name on the cover. Not even a story title was necessary. It's supposed to be the man himself on the cover but he looks more like Ronald Colman than either John Howard, who then was playing Drummond in a series of B pictures, or the charismatically ugly man Sapper described. Not even the author's name was necessary, by the way, but there's a reason for that. McNiele died in August 1937, and this is the first Bulldog Drummond story credited to another author. Bulldog Drummond on Dartmoor still has a connection to Sapper, however. It's a novelization of a play Gerald Fairlie had begun collaborating with Sapper on before the creator's death from cancer. Fairlie completed it with Sapper's permission and went on to write more Drummond novels, though this serial marked the character's last appearance in DFW. The only other series character this issue is Charles Alexander's Sergeant McChesney, who appeared only eight times in a roughly five-year period from 1934-39. DFW stalwarts Richard Sale and Cleve F Adams are on hand this week, as are Carl Clausen and B. B. Fowler, but it's clear enough that this is Bulldog Drummond's show and a sort of homage to Drummond's creator.
Posted by Samuel Wilson at 7:12 PM