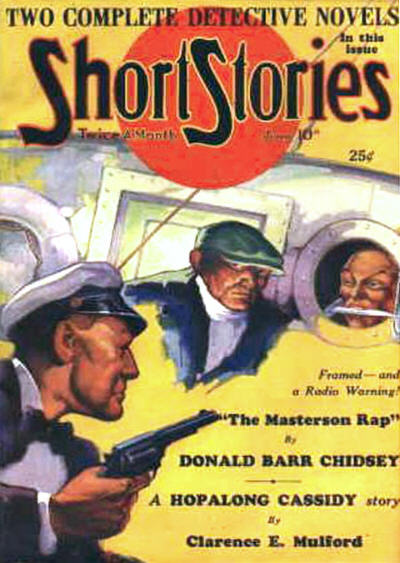 This 1933 issue Short Stories has an impressive lineup of pulp stars and 20th century pop culture icons. Hopalong Cassidy's greatest fame was yet to come in the early days of television, but Clarence E. Mulford had been writing his hero's adventures since 1905. Short Stories had been Hoppy's home, more or less, since 1926. This issue's story, "The Herd Keeps On," dates from about two years before William Boyd assumed on film, in somewhat bowdlerized form, the role that would make his fortune more than a decade later. Meanwhile, Leslie Charteris's "The Gold Standard" is one of the first American appearances of Simon Templar, aka The Saint, "the Robin Hood of Modern Crime." It's reprinted, or course, from a British magazine, but the character would soon grow popular in the U.S. that Charteris, having moved here himself, would soon give American publishers first dibs on Saint stories. Neither Donald Barr Chidsey nor Theodore Roscoe created characters as legendary or popular as the two abovementioned. They had to be content with being prolific masters of pulp, represented here by Chidsey's cover story, "The Masterson Rap," and Roscoe's "Pirate's Price." These four novelettes or short novels are enough for any pulp, but in addition Short Stories' 176 pages include the third installment of Captain Dingle's The Ship Killers and short stories by Doane R. Hoag, George Rosenberg (better known as George Armin Shaftel) and Bertrand W. Sinclair. Hoag would move to Hollywood after a relatively brief pulp career. He worked mainly in short subjects and later wrote several episodes of the Lone Ranger TV series. He also collaborated on the cult monster movie The Hideous Sun Demon. Hoag died in 2008, two months short of his 100th birthday. I can't judge his work but there are enough reliable names in this issue to make it worth having some day.
Posted by Samuel Wilson at 12:00 AM