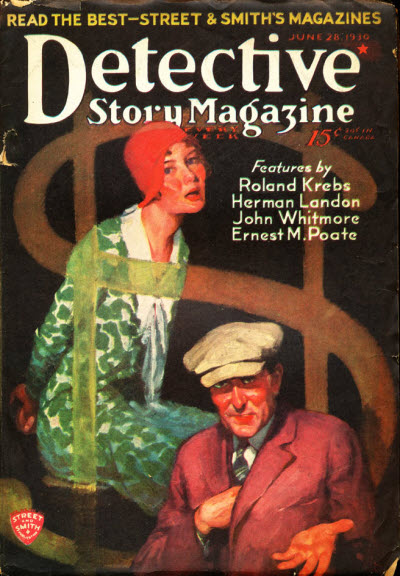 Money! I picked this 1930 Detective Story for today entirely because of the cool cover. This seems to be one of the periods when Street & Smith indulged in symbolic cover imagery. No attempt is made to link the image to any of the stories inside or the authors advertised. The star among them seems to have been Herman Landon, whose novelette stars one of the magazine's most popular series characters, Martin Dale, aka The Benevolent Picaroon, a good-hearted thief who stole purely for the thrill of putting something over on the police. The Picaroon starred at Detective Story from 1921 through 1932 and made at least encore appearance in Detective Fiction Weekly in 1935. This issue is also unusual in featuring two stories that are their respective authors' only known contributions to pulp. However, that may only indicate that Richard P. Collins and Charles Valette Slattery are pseudonyms or house names, possibly covering for authors already credited with stories in this number. For all we know, however, this issue marks the career peak of two authors who are otherwise lost to history. There's a mystery for you....
Posted by Samuel Wilson at 12:54 PM