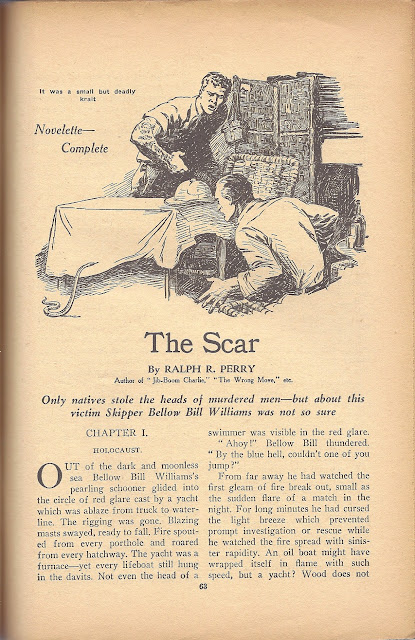 Ralph R. Perry's tattooed pearler has a way of wandering into trouble. This time he has to watch helplessly from a distance as a yacht burns at sea without releasing any life boats. Once his own ship gets close enough for him to scan for victims or survivors, Bellow Bill sees a headless corpse on deck and presumes that a tribe thought tame has gone savage and turned pirate again because "Natives, not white men, take heads. Not even white murderers do that." He's proven wrong when he finds a survivor floating in the water, just as he's proven wrong after initially assuming she was dead. She'd tried to stab herself to spare herself the fate worse than death, but "you need strength to drive a knife home." She insists that the lead pirate, at least, was a white man, as she can tell from the shape of the man's head. Now that she's planted the idea in his head, Bill thinks he knows who did it, a trader named John Mageen, and comes up with a plan to trap him. Is Bellow Bill right this time? Perry makes Bill fallible enough that moments of doubt are possible. It also helps that Perry is really good at crafting antagonists for Bellow Bill. They're not necessarily charismatic characters who get the best lines, but they're usually tough, tenacious and clever. Perry makes nearly as big a deal about Bill's strength as Robert E. Howard does with his heroes, but Perry's special virtue as a pulp writer is the way he makes things relentlessly difficult for Bellow Bill. There's an extra degree of difficulty in "The Scar" because Bill ultimately has to outsmart an adversary who doesn't crack under pressure and doesn't betray himself in any obvious way. That doesn't mean there's no fighting; in fact, Bill soaks up several bullets during a climactic breakout from a death trap. But for all that his enemies often call him a tattooed ape, "The Scar" showcases Bellow Bill Williams as a thinking animal, if not a psychological warrior against evil. It ends a little too neatly, with the villain brazenly confessing his whole scheme to a British officer, but it's good, pulpy fun while it lasts. You can download it from the link below: