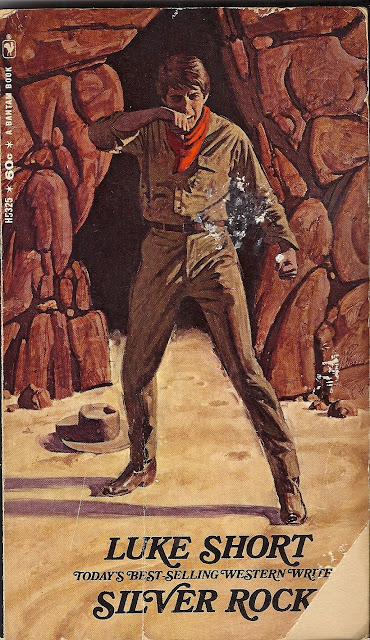 Luke Short, nee Frederick D. Glidden, was probably the most popular western writer between the heydays of Max Brand and Louis L'Amour. I remember seeing his name on retail book racks all the time when I was just a kid, which would be around the time of his death and some years afterward, but you won't find him in your typical bookstore's small western section today, even though his successor L'Amour and his predecessors Brand and Zane Grey will still be there. I'm not sure why that is, except that at a crucial time he failed to be prolific enough to be marketed as relentlessly as a brand name as L'Amour would be.Silver Rock was a change of pace for Short: a modern story but still generically a western. You have two familiar western tropes combined here: the hero who arrives in a town having known one of its lost sons in a war, though perhaps not so well as he claims, and one of the hoariest of archetypes, the deadline to fulfill a contract or pay back a loan while hindered by sabotage. Tully Gibbs comes to the mining town of Azurite after serving in the Korean War, preceded by letters from his crewmate recommending his character and his mining knowhow to the now-dead hero's old man. The big secret of the story is that Tully wrote those letters himself, having heard from the dying crewmate, who was really friends with no one, about the potential for rich mining on the family claim. His scheme to open the silver mine puts him at odds with the town's leading miner, Ben Hodes, an archetypal bully. Goading Hodes into a fight, Gibbs gets him to wager a $10,000 loan on the outcome and kicks his ass. He makes Ben's life miserable in other ways, making moves on Ben's girl while encouraging Ben's spinster sister to get out from under brother's overprotective thumb. Naturally, with help from a member of the county commission, Hodes will try to stop Tully from generating enough revenue from the mine to pay back the loan in time. It was a commonplace in genre fiction that in entrepreneurial competition at least one of the competitors was a bully who cheated. I wonder if that struck anyone as subversive in those Cold War years.... 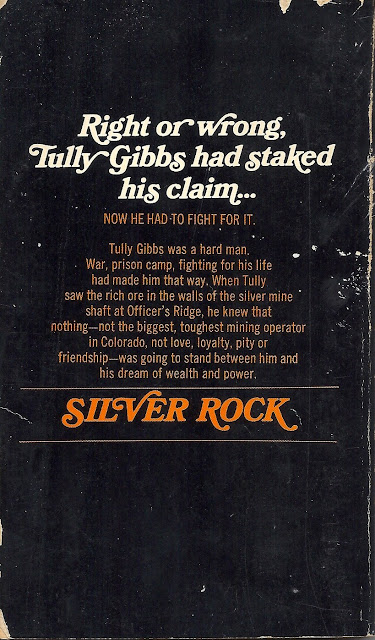 The interesting thing about Silver Rock is Short's effort to balance a commitment to modern realism with an obligation to provide generic action. He's done enough research, or had enough experience, to write a plausible portrait of small-time politics in a mining town. Most significantly, he strives to tone down the melodrama. Were this a conventional western, it might end with some last minute race to get the ore down the blocked road to meet the deadline on the loan -- or it might end as the Republic Pictures movie version Hell's Outpost (1954) does, with Ben Hodes trying to blow up the one road from the mine. In the novel itself, however, Hodes is defeated through bureaucratic detective work that exposes illegal collusion between him and the commissioner, making the sabotage (which climaxes in a sniper attack on Gibbs' mining camp, with machinery rather than men the main targets) moot. Short apparently realized that this might seem anticlimactic to his fans, so he stages a final fistfight between the victorious Gibbs and the vindictive Hodes. Even then, it's enough for Hodes to be beaten down yet again, while Hell's Outpost closes with Hodes killed by his own explosion. So Silver Rock is at once cliched in its fundamental situations and yet not cliched in the way the story plays out. I was impressed by Short's grappling with cliche, and even if he didn't truly pin it down there's a freshness to his approach that made reading the novel worthwhile. Like all his peers, Short knew how to take care of business. Silver Rock comes in at 151 pages in my beat-up 1970 paperback edition but you don't feel shorted (no pun intended) on detail and character, at least by genre-fiction standards. I miss that entertaining efficiency in today's fiction.

By 1970 Short's day was nearly done. Bantam still billed him as the best-selling western writer, but note the superlative epithet they give L'Amour in the back-page ad. Time would tell who was faster; who was better is another story. 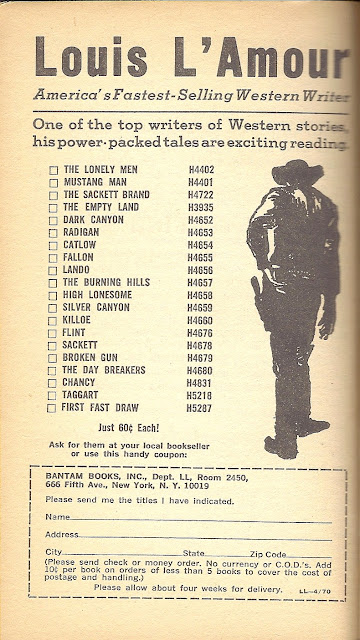