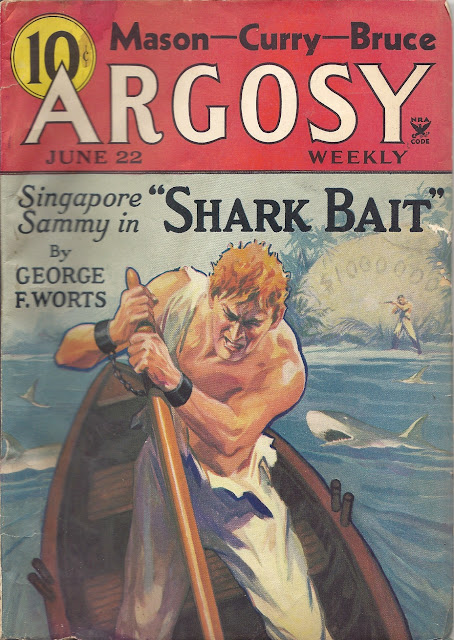 Back to my 1935 Argosy collection, here's the start of the one complete Singapore Sammy serial by George F. Worts in my collection. Shark Bait is only a three-parter so it's not that impressive an achievement but I'm pretty proud just the same and I look forward to reading the whole thing over the summer It looks like Sammy hasn't been doing so hot since dealing with The Monster of the Lagoon earlier in the year -- he definitely doesn't look as cool and badass as he did on his last cover back in February -- but he has one more serial in him after this so I wouldn't worry too much. This issue is strong on the serial front, also including part two of F. V. W. Mason's Lysander of Chios and the penultimate installment of Hulbert Footner's Sink of Iniquity. 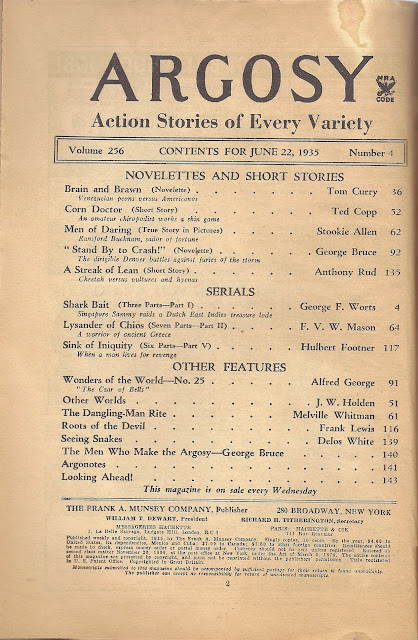 June 22 also has a solid lineup of standalone stories, led by novelettes from Tom Curry and George Bruce. The latter, an aviation specialist who contributes an autobiographical sketch on the "Men Who Make the Argosy" page, had recently been so popular with pulp fans that he had had magazines named after him. The short stuff may be the weakest this issue. Anthony M. Rud contributes an animal story, while Ted Copp is a relatively unknown quantity for me. His looks like an attempt at humor, however, so I'll be on my guard. I prefer to emphasize the positive, since this starts a run of four consecutive issues encompassing two complete three-parters, the second of which I'll introduce a week from now. This number was brought to you by: 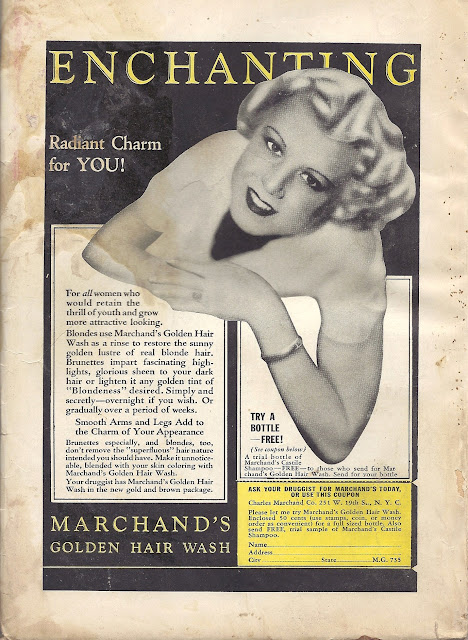 For all the emphasis on action stories, this ad reminds us that Argosy was aiming at a female audience as well, as the Argonotes letters pages often remind us. This week, for instance, while praising Monster of the Lagoon, Frances Gunther of Yamhill OR tells readers that "I could love Sammy. He isn't really bad." She's also glad that Worts "did not forget the girl, which made the story more interesting for us female readers." You wouldn't take Singapore Sammy for girly stuff, but there it is.