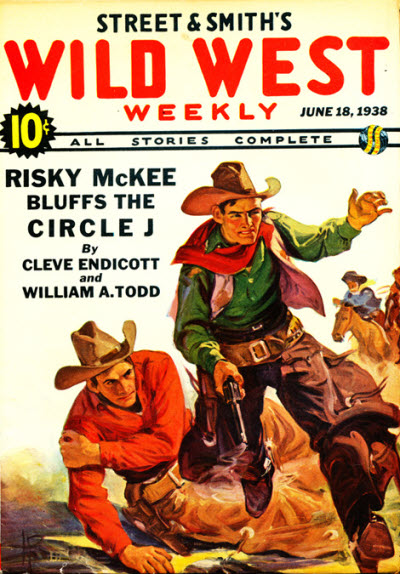 For comparison's sake, here's the difference art direction can make. This is Wild West Weekly from a year, less a day, before our June 17 cover. By this point the cover format hadn't really changed much since 1929, and it shows its age. The actual art isn't bad but the white background leeches some of the life from it. The story advertised is one of Wild West's frequent crossovers of popular characters. The punchers of the Circle J ranch, led by Billy West, were the magazine's signature characters, written by numerous authors under the Cleve Endicott house name. William A. Todd's (aka Norman W. Hay) Risky McKee was a more recent creation, first appearing in 1935. Series characters predominate in this number, though Ralph Yergen and Chuck Martin contribute standalone short stories. I think the more abstract 1939 covers are more interesting, but I could understand if more literal-minded pulp fans at the time felt differently.
Posted by Samuel Wilson at 12:00 AM