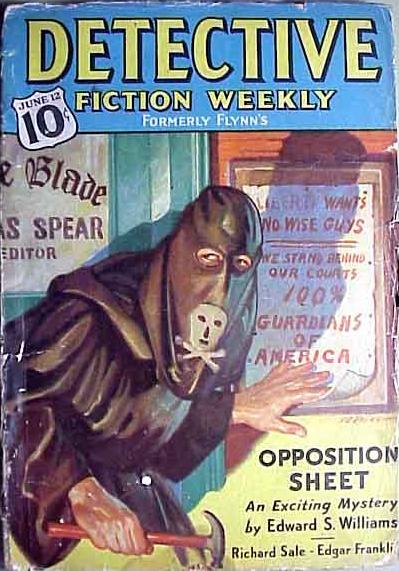 Here is a bogeyman of 1937: a spectre of the Black Legion. Immortalized by a 1937 Warner Bros. film, the Black Legion was a northern, urban version of the Ku Klux Klan, the great-grandfathers of the sort of people presumed today to be attracted to Donald Trump. In other words, working-class xenophobes whose fears were stoked by a still-precarious economy in which immigrants and black migrants from the south were unwelcome competitors, irredeemably foreign from the standpoint of white Protestantism. The movement gained notoriety in 1936 when one group kidnapped and murdered a Works Progress Administration official, supposedly for beating his wife but also, and perhaps more importantly, for having an interdenominational marriage. I'm not familiar with Edward S. Williams but I'd definitely be interested to see his pulp-fiction take on the Black Legion in this Detective Fiction Weekly. The nearly-omnipresent Richard Sale is on hand with a Daffy Dill story, while Edgar Franklin (Stearns) contributes one of the nineteen Johnny Doland stories he wrote for DFW in little more than two years. T. T. Flynn continues his serial Murder Caravan while we get a short story from Thomas W. Duncan and a novelette from K. Krausse. According to the Fiction Mags Index, and in apparent confirmation of my suspicions whenever a pulp author has an initial instead of a first name, the K. is short for Kaye. That cover really sells the issue without any actual promise of action. It promises that more than normally, this issue is a distinctive product of its time.
Posted by Samuel Wilson at 12:00 AM