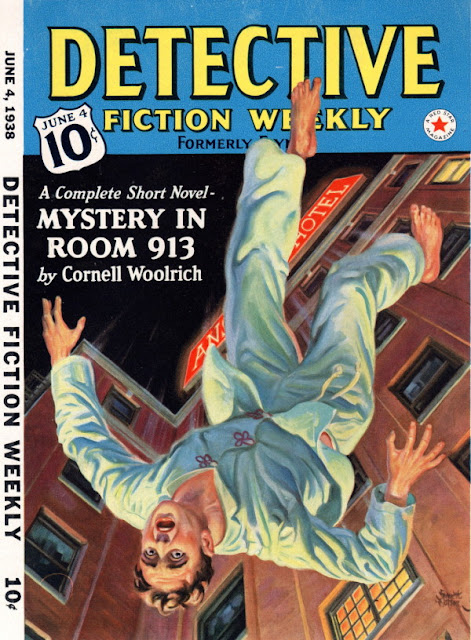 Well, this does look like the sort of situation a Cornell Woolrich hero would get into. In fact, didn't I see something like this at the end of the Woolrich-inspired Rear Window? Granted, the window wasn't so high and you saw the action from the opposite angle, but you get the general idea. The  Munsey pulps -- Detective Fiction Weekly, Argosy, Double Detective and the short-lived All-American Fiction -- were Woolrich's most dependable market in 1938. Out of 24 Woolrich stories listed for that year in the Fiction Mags Index, 18 appeared in Munsey publications. He's the one author of this particular issue still widely remembered today, though pulp fans know Judson P. Philips fairly well. This issue's series character is Charles Alexander's Indian John Seattle, who had been appearing in DFW intermittently since 1933, and would appear at least three more times over the next year. Sheriff Seattle was not a real Indian, I learn, but a white man who grew up learning stuff from the Nez Perce that came in handy for country crime fighting. Also along for the ride are Arden X. Pangborn, whom I know for his Wong Soo stories in Argosy, and three writers I know not at all: Anthony Armstrong, Herbert Koehl and Julius Long. The Woolrich probably makes this issue worthwhile, and the others might be a bonus.
Posted by Samuel Wilson at 12:00 AM