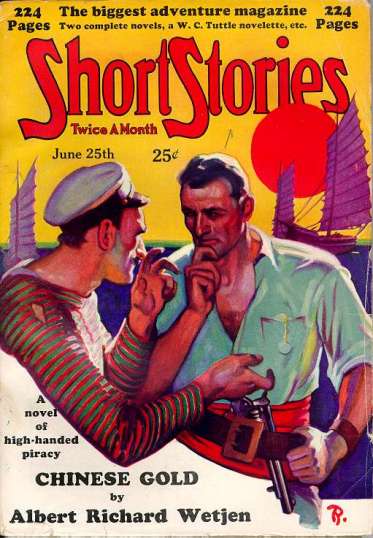 Here's a Short Stories from the pulp's most ambitious period, those months in 1932 when the twice-weekly magazine expanded from 176 to 224 pages in what I take to be a conscious effort to outdo the 192 page Adventure. The two pulps shared a lot of talent, including this issue's cover novelist, Albert Richard Wetjen, and the ever-popular W. C. Tuttle. This issue's other "complete" novelist is Eugene P. Lyle Jr., an author best known for his science fiction and a prophetic novel, written at the end of World War I, predicting a second world war for 1938 -- not that bad for accuracy. Whether this issue's "The Killers" was sci-fi (or "fantastic") or not I can't say. Hugh B. Cave contributes this number's fourth long story, the novelette "The Reformation of Private Blake." Joel Townsley Rogers concludes his serial Enter Captain Death while six other authors contribute short stories, including firefighting specialist Karl Detzer. Thirty-eight pages of Wetjen is an attraction unto itself for me, and while Tuttle is hit-or-miss for me I've come to like Cave and Detzer and I'd be willing to give the other contributors a try. All of these monster 1932 Short Stories issues look like treasures to me.
Posted by Samuel Wilson at 5:35 PM