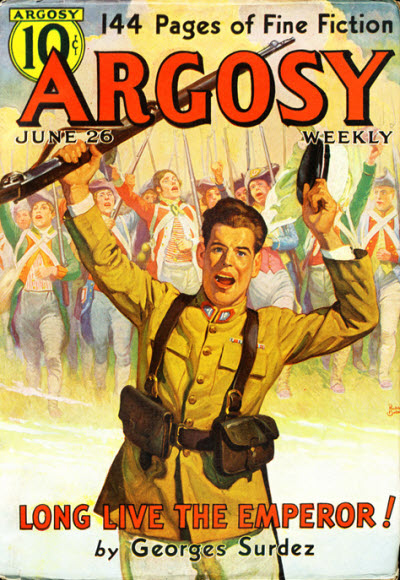 This 1937 Argosy is part of the unz.org online collection. It has a strong lineup of writers, including two of the top Foreign Legion specialists, Georges Surdez and Robert Carse. Of course, they can't both do Legion stories in the same issue, can they? So Carse contents himself with another favorite subject, Haiti, while Surdez goes in a relatively comical direction, his hero encountering the archetypal madman who thinks he's Napoleon Bonaparte. There's a French accent to Donald Barr Chidsey's novelette, "A Strange Place to Be," as well. There's also one of C.F. Kearns' stories about Handsled Burke and Two Horse Sven, and they're usually pretty good, while Dale Clark's satires about Hollywood talent agent J. Edwin Bell have never really impressed me. The strong serial contingent consists of George (Frederick Faust) Challis, Johnston McCulley and Eustace L. Adams. On a side note, an Argonotes correspondent this week recalls reading Otis Adelbert Kline's Jan of the Jungle serial from 1931 and describes it as "the best story I ever read." I happen to be reading Jan right now, and all I can say is that I dread to sample anything else she'd read. The stuff in this Argosy is mostly much better.
Posted by Samuel Wilson at 8:11 PM