THE PULP CALENDAR: December 1 -- featuring BELLOW BILL WILLIAMS in "THE RATS OF MAHIA" 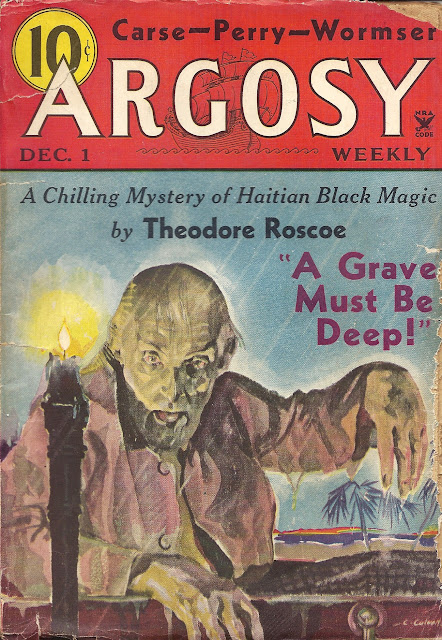 Here's a remarkable 1934 Argosy in a less than remarkable copy from my own collection. This issue was a must-have for me because it has two of my favorite things in a pulp magazine: a Bellow Bill Williams story by Ralph R. Perry and a Tizzo the Firebrand tale by George (Frederick Faust) Challis. This is, in fact, the conclusion of Tizzo's two-part debut, The Firebrand, but that event is understandably overshadowed by the cover feature, the opening installment of Theodore Roscoe's seminal voodoo serial A Grave Must Be Deep! Roscoe, of course, is writing about Haitian zombies, not the kind that eat brains. He was no doubt inspired by recent voodoo movies, including Bela Lugosi's White Zombie and the Fay Wray vehicle Black Moon, but Grave shapes up on first impression as yet another "old dark house" story in an exotic setting. A starving artist's girlfriend and patron is an heir to a relative who died and left a fortune in Haiti. Accompanied by a well-spoken native lawyer, the couple travel to the "magic isle" and encounter a variety of grotesques -- and that's just in the old man's household. He's left a will putting the girl far back in the order of succession to his fortune, with a stipulation applying to all heirs requiring them to stay at his estate for a certain amount of time. Need I add that the girl moves a couple of steps closer to the big payday in this installment alone? Perhaps I should add that the old man also stipulated that he be buried Haitian style with all the safeguards against being turned into a zombie, while the lawyer blusters that he doesn't believe in such stuff. For some people Roscoe's writing will be irredeemably racist, but this is a story in which everyone but our hero and heroine is a grotesque caricature, be they black or white -- that extends to a German hanger-on whom everyone calls "the Nazi." It promises to be all quite deranged, and I look forward to catching up with the rest of it someday. 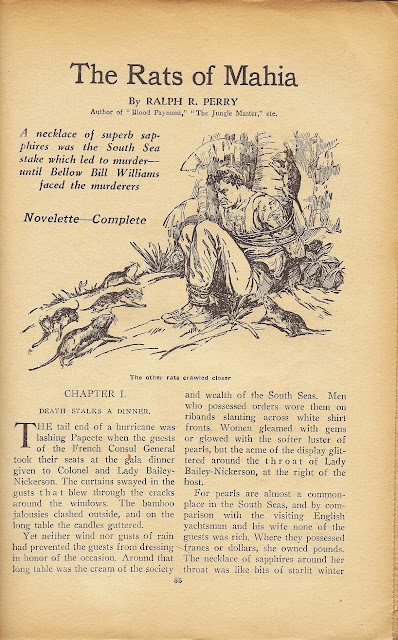 Meanwhile, Bellow Bill looks to be in a bad spot. He joins the chase after a high-class island dinner party is interrupted by a half-naked Melanesian crashing the party, cleaving the skull of a society matron and stealing her sapphire necklace. Diving after the savage, he sees the culprit getting into a boat and assumes, since the sea is still stormy after a hurricane, that the gang must be heading for a nearby island known by Bill as the haunt of Knife-Hand Foster, a notorious "blackbirder" named after the retractable bayonet he wears over a mutilated hand. He finds Foster in his own boat, having killed the Melanesians in "self-defense" but claiming that he saw the sapphire necklace go over the side during the melee. Bill doesn't believe it but has no real clue where the thing might be, and no idea of how to get at it except to go to the rat-infested isle of Mahia, where more human rats await him. Bill and his creator are in good form here as Perry emphasizes that our hero has rushed overconfidently into a situation where he may be out of his depth, pitted against not one but two blackbirders -- slave raiders to you -- who seem to be working together but may also have separate agendas that make them hard to predict. As usual, Perry excels at throwing obstacles in Bellow Bill's path, including the vicious, hungry little title creatures. Few pulp writers do action thrillers as well as Perry, and anyone who's become a Bellow Bill fan this year should enjoy this one. 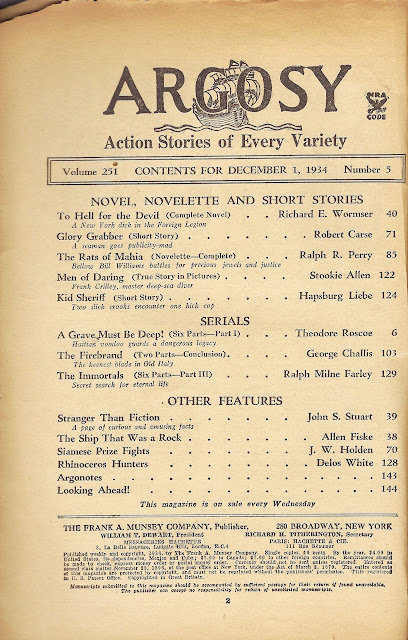 It's not Robert Carse but Richard Wormser who writes this issue's Foreign Legion novelette. While Carse contributes a sea story about an officer who takes big risks in search of fame, even when situations don't necessarily require his intervention, Wormser writes something more like a detective story in a Foreign Legion setting. This makes a difference. The protagonist of "To Hell For the Devil" is a detective who hopes to make a name for himself by capturing one of the gang who kidnapped, tortured and mortally injured the heir to a prominent fortune. A combination of ambition and indignation over the fate of the victim drives the detective to pursue his man across the Atlantic and into Africa, where he finds that his quarry has enlisted in the Legion. This is a problem, since the Legion doesn't cooperate with American law enforcement. It depends too much on fugitives from justice for its manpower, and turning over a wanted criminal, no matter how heinous his crime, would discourage enlistments. Our detective sees no alternative to enlisting in the Legion himself in the hope of coming across the fugitive, even though the Legion is fully aware of his identity and purpose and is determined to keep him as far away from his man as possible. For a while it becomes a standard Legion story as the chubby middle-aged detective is whipped (not quite literally) into shape and almost loses track of his mission. But a big battle brings together many units and gives him the break he's looking for. Had this been a typical Legion story, the sort Carse, Georges Surdez or J. D. Newsom wrote, you might expect hunter and quarry to bond in battle, forcing a dilemma on the detective in the end. But Wormser is writing a detective story, and once the big battle is out of the way the detective grabs the fugitive and bolts for the border, knowing full well that he'll be shot for desertion if the Legion catches up with him. Wormser's unorthodox approach freshens up some of the familiar Legion tropes, and even if his story does end somewhat anticlimactically it's a good read.

Rounding out the issue are Hapsburg Liebe's short story "Kid Sheriff" and an installment of Ralph Milne Farley's sci-fi/horror serial The Immortals.  This is such a good issue overall that instead of scanning the Bellow Bill story alone, I've scanned and uploaded the whole thing. It's a hefty .cbz file that you can convert to a .zip and then adapt to suit your viewing or reading needs, but it ought to be a treat for any pulp fan. You can get it by clicking on the link below:

And before I forget, this issue was sponsored by: 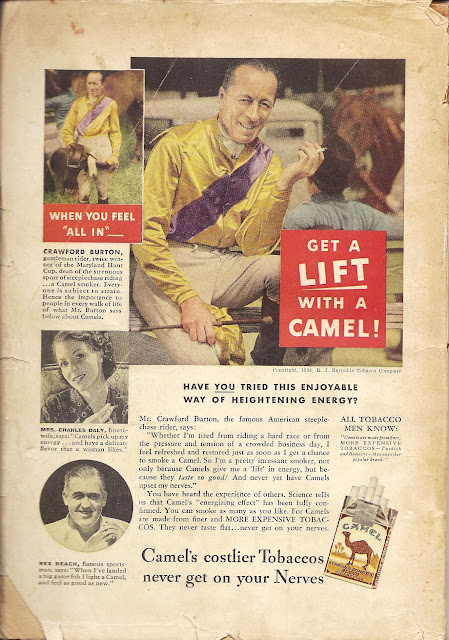