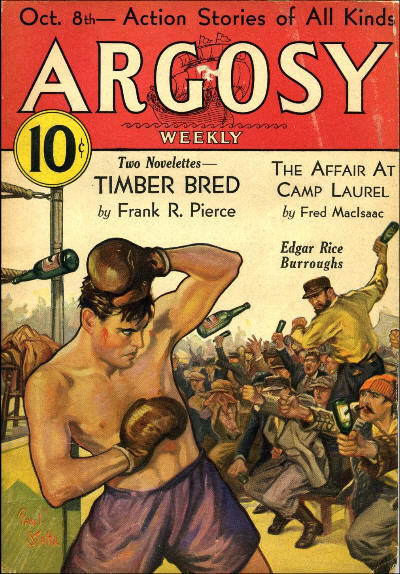 I imagine lumberjacks would make a tough crowd for any fighter, a crowd of pulp lumberjacks especially, given how they fight each other all the time. While this 1932 cover promotes Frank Richardson Pierce's novelette "Timber Bred," it also serves as a prophecy of what was coming for a new Argosy author. Frank Mercer Morgan had an abrupt pulp career. He's credited with a text story in a 1923 issue of Ace-High Magazine, and doesn't reappear until 1932. He published a story in West and a non-fiction piece in Blue Book before Argosy accepted his two-parter Golden Doom and prepared a "Men Who Make the Argosy" column for the new talent. After Golden Doom Mercer followed up immediately with the short story "Flame of the East." A month later he was finished as a pulp writer. Argosy had learned that Mercer was a blatant plagiarist. Golden Doom had been lifted from H. Bedford-Jones' 1924 novelette "Madagascar Gold" from Blue Book, while "Flame of the East" was taken from James Francis Dwyer's 1912 "Golden Woman of Kelantan," published in Red Book and reprinted in the Sunday supplement American Weekly. Perhaps Mercer thought that so much had been published in pulp that no one would notice if he reused some. If so, he underestimated the fan or collector mentality -- or else Bedford-Jones and/or Dwyer saw and remembered. One can only hope that the rest of this issue's contents -- serials by Edgar Rice Burroughs, Robert Carse and J. E. Grinstead, a Fred MacIsaac novelette, a short story by C. S. Montanye -- were as original as pulp could be by this point.
Posted by Samuel Wilson at 5:30 PM