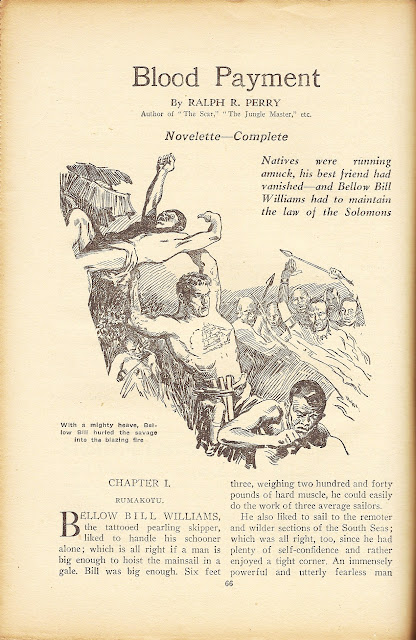 The "Law of the Solomons," according to Ralph R. Perry, is that "any native who enters the clearing of a white man unclothed, or carrying a weapon, may be shot." A lone female anthropologist is attempting to enforce this law against a "native orgy" virtually on her doorstep when Bellow Bill Williams arrives on the island of Rumakotu. Out pearling by himself, Bill got a booboo while trolling and soon realized that he has to see a doctor to escape blood poisoning. "To play a lone hand exacts its penalties," Perry notes. Rather than take a long run to Tahiti, Bellow Bill recalls that a trader on Rumakotu used to be a doctor and probably still knows enough to fix Bill's trouble. Instead of the doctor Bill finds the anthropologist besieged in her bungalow, and at least one native armed with an automatic rifle, when they're not supposed to have firearms of any sort. After fighting his way to the girl, Bill learns that the doctor has disappeared after attempting to calm the whipped-up natives, while a third white man has been lost at sea. Something about the story doesn't sound right to Bill, who's convinced by the native with the rifle that yet another white man, and a malevolent one, must be on the island. In short, there's a mystery for Bellow Bill to solve while safeguarding the plucky girl scientist against the natives. "Blood Payment" is one of the more indefensibly racist of Perry's stories, and while Bill is more physically handicapped than normal by his illness -- he never can shoot well, anyway -- the story isn't that much of a mystery since Bill's every hunch proves right, making him more infallible than he usually is in this series. This is still good, suspenseful pulp action from one of Argosy's more popular series of the early 1930s. You can read it for yourself by following the link below.