VINTAGE PAPERBACK OF THE WEEK: Frank Kane, DUE OR DIE (1961) 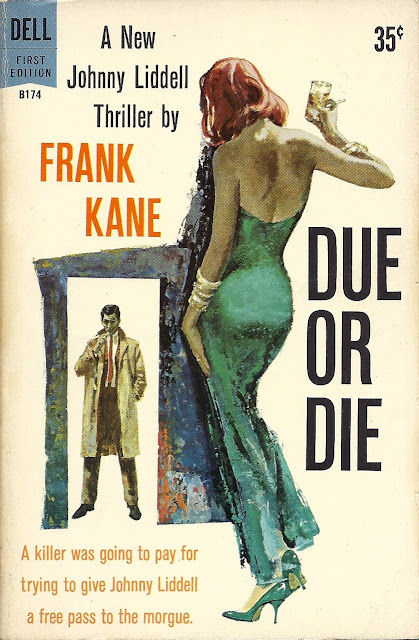 Writers like Frank Kane were born too soon. It's not hard to imagine Kane today making a mint off hardcover Johnny Liddell novels, though each probably would have to be a good deal longer than the terse paperback originals he ground out for Dell in the 1950s and 1960s. Kane figured out what he was good at early; he created Liddell in only his second published pulp story, a 1944 novelette in Columbia's Crack Detective Stories. Crack was Johnny's home for the rest of the decade, though Kane was also writing novels by the turn of the decade. In the Fifties Liddell worked the growing neighborhood during the golden age of the hard-boiled digest magazine, becoming a fixture in the legendary Manhunt as well as a supporting player in Mike Shayne's Mystery Magazine. No one makes great claims for Kane as a writer, but his Liddell novels were hard-boiled comfort food that many clearly enjoyed. At peak productivity he could finish four a year. Due or Die was a product of just such a productive period. 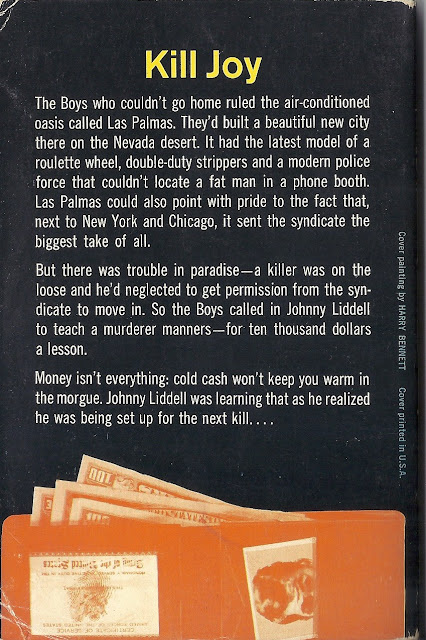 Johnny Liddell is a pretty generic hard-boiled dick, tough yet catnip to the ladies, though he has a steady girlfriend. Based in New York, he's seduced (in the scene illustrated on the front cover) into going to Las Palmas NV to help the mobsters running its casinos with a problem. Don't confuse the place with Las Vegas, which is mentioned in the story. Las Palmas is a still more corrupt place, run by the people who can't go back to their old haunts in the east, guarded by the cast-offs of police forces across the country. Someone is running a shakedown on the Las Palmas mobsters, having already killed one of the casino bosses while demanding a lump sum from the rest. They have to act fast because should another be killed, each survivor's share of the payoff will increase. "Fat Mike" Klein, whose moll recruited Liddell, wants the detective to track down the shake artist. But Johnny's hardly arrived before Fat Mike himself is killed. At first I thought Fat Mike might be pulling a fakeroo to shake down his colleagues, but we soon get pretty indisputable proof that he's quite dead. So whodunit? Kane offers us a good number of suspects, from Fat Mike's gangster peers to the corrupt cops who play rough with interlopers to a small-timer trying to muscle into the big time. You might even believe the moll might be behind it, but she and a rare good cop in town prove to be Johnny's best allies as he unravels the mystery. It's one of those mysteries that isn't solved by forensic clues, but by Johnny finding out something important that Fat Mike and only a very few others knew. Along the way there's standard but decently written hard-boiled action, and Kane gives you a good sense of the stakes when the bad guys prove willing to blow Liddell and all the other passengers of an airliner out of the sky to cover their trail. Some of the details are dated, as when Johnny compares one woman with the briefly-popular actress Juliette Greco, but his lean style should make the Liddell novels fairly accessible for the modern reader, so long the reader doesn't feel that a story lacks authenticity if it lacks profanity. Kane is like a decent but not profound craft beer; not an imperial stout or tripel ale, but it hits the spot and you'd have another bottle sometime -- and as a matter of fact I just picked up a nice copy of Two to Tangle (1965) this week.
Posted by Samuel Wilson at 6:23 PM