VINTAGE PAPERBACK OF THE WEEK: Alexander Cordell, THE DEADLY EURASIAN (The Bright Cantonese, 1967-9) 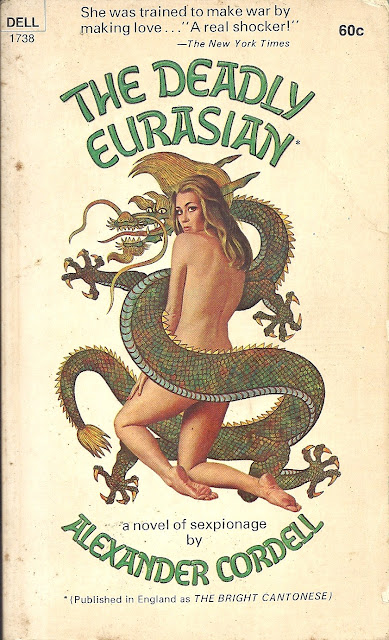 The 1969 Dell paperback oversells Alexander Cordell's novel as a piece of exploitation -- "a novel of sexpionage" -- but while there are some florid descriptions of lovemaking this book isn't quite what someone looking for sexpionage in the late Sixties would expect. Cordell is best known for historical novels set in Wales but was raised in the Orient and made it a subject of several novels. He was a leftist if not an outright Maoist -- a later novel is set during the Long March of the 1930s -- which explains Cordell's unorthodox presentation of a Chinese Red Guard as his heroine. Mei Kayling is "the bright Cantonese," the brightness referring both to her intelligence and her naturally blonde hair, which she dyes to better pass for full-blooded Chinese. A true believer in Chairman Mao, Mei is part of the intelligence bureau, investigating the cause of a nuclear accident. Something isn't right about the story the government is telling about an explosion at a nuclear research facility; survivors recall the flash coming from a different location. To get to the bottom of the matter, Mei must sneak into Hong Kong with a flood of refugee victims of the explosion, many of them blind. There she's to meet an American naval deserter, a technician on a destroyer that apparently fired a missile into China. Mei must try to learn from the sailor, a black man named Dick Wain -- that's a name I would expect to see in a "sexpionage" novel -- whether the missile was launched accidentally or deliberately. The answer will determine whether China will retaliate or not, using their "Sea-Entry" strategy of smuggling nukes on board cargo ships into American ports. 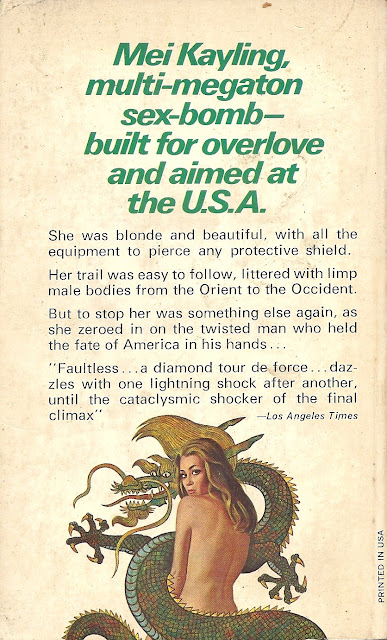 To cut to the chase, Mei Kayling falls in love with Dick Wain (he's just plain "Negro" to her most of the time) and begins to resent the planned exploitation (or worse) of him by her superiors. That doesn't compromise her commitment to communism or her determination to fight its enemies. She takes the fight to the U.S., tracking down the vicious American operative who instigated the missile strike, a fellow fond of torturing and killing female Chinese spies. He's not the only problem she faces here. It develops that a faction of Chinese intelligence doesn't want to wait for Chairman Mao or the Politburo to decide how to respond; they intend to activate the Sea-Entry strategy and present their government with a devastated U.S. as a fait accompli. In an apparent rebuke to the conventions of spy thrillers, Mei defeats the ringleader of this plot but learns that taking one person down isn't enough to stop it. In its denouement The Bright Cantonese reveals itself as a sort of apocalyptic romance as Mei Kayling, sick of the cynical, exploitative ways of all governments, appears content to let the world burn -- the American dead alone are 38 million and counting as the novel closes --- so long as there's a chance that her lover still waits for her "a long way from the hypocentres."

The Bright Cantonese probably doesn't count as a pulp novel but it has plenty of purple prose. It's the sort that shows literary ambition, not the kind that counts the pennies per adjective. But it often can be just as overblown if not more so. As you might expect, Cordell is at his purplest in his love scenes.

I could tell of enchantment, but it was not this; of the fluttering bird in the hand or a spread-eagled assault on womanhood, but this was not so. It is a desperate shipwreck of love when you can remember it as nothing but a soothing joy; no elemental oneness, this, no sensuous stumble into love, yet a tumult for all the scheming, a gossamer fabric spun in starlight: a savage mating in a place of primitive wave-cry and fierce moonlight. His breath was sweet and clean; decency was on his tongue when he spoke to me. And when I opened my eyes wide to the man above me it was not Kwan, he who took and starved me, but the face of darkness, he who bestowed a rhythm of strength and beauty.


That may be bad writing to some, but it contributes to the novel's idiosyncratic identity. It may be one of a kind in the spy genre, and that alone may make it worth reading, if not for pure reading pleasure than for discovery of more that could be said or imagined  during the Cold War than we might have expected.
Posted by Samuel Wilson at 12:00 AM