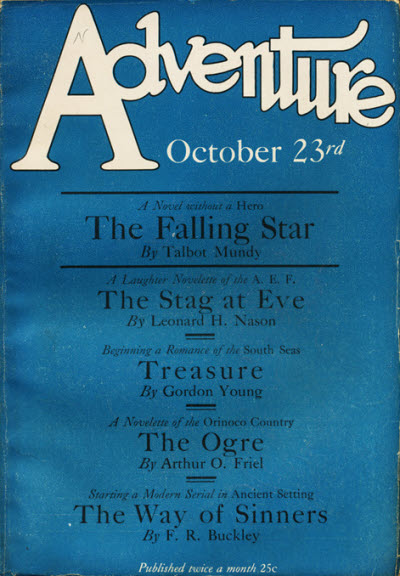 In the golden age of Adventure the painted covers were decorative rather than illustrative. The most a cover would tell you was which writers were in that issue. You had no hint of what they were writing about it, because the cover was doing its own thing. Starting with this 1926 issue, the Butterick company that published Adventure adapted a diametrically opposed cover policy. Now you'd find out a lot about the contents, with no art on the cover at all. This put Adventure in line with the more literary squarebound magazines of the period like The Atlantic Monthly, The American Mercury and Harper's. It's said that the publishers wanted to elevate the tone of the magazine, but I wonder whether regular readers appreciated the change. I haven't seen issues from this period so I don't know what sort of feedback appeared in the "Camp-Fire" letters column. What I do know is that Butterick retreated a little in March 1927, when prestigious illustrator Rockwell Kent was brought in to do woodcut-style covers. By August of that year Kent was gone and Adventure had fully painted, purely decorative covers again. Perhaps not coincidentally, beloved editor Arthur Sullivant Hoffman departed shortly before.

At least this phase started strong, with a "full-length" novel by Talbot Mundy and novelettes by Arthur O. Friel and Leonard H. Nason leading the way. Two serials also launch this issue, by Gordon Young and F. R. Buckley. Harvey Ferguson makes his only Adventure appearance this issue, while Andrew A. Caffrey, Kingsley Moses and L. Paul join him. This issue may not be much to look at, but it does look like plenty of good reading.
Posted by Samuel Wilson at 4:06 PM