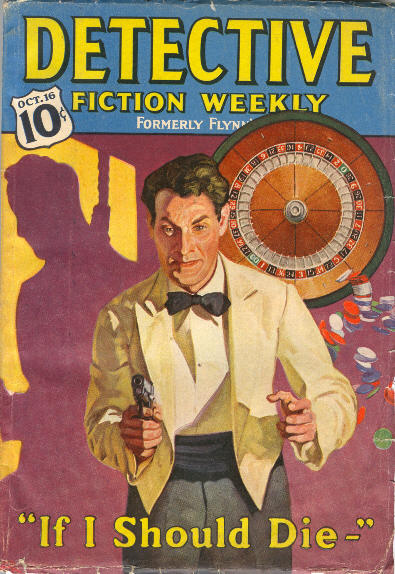 Detective Fiction Weekly was a little dodgy sometimes about crediting the authors of their cover stories. It makes for neater covers from an artistic standpoint but it wasn't really fair to the writers. The author of "If I Should Die" was Edward S. Williams, who wasn't exactly a nobody in the business. After an apparent false start with a 1931 western, Williams returned in 1934 as a detective writer and stuck. He'd been publishing in DFW since 1935, but it looks like he hadn't succeeded yet by this 1937 issue at creating a successful series character for the Munsey mag. He'd do better later with Dennis O'Ryley, aka The Voice, who became a regular feature in Popular Publications' Ace G-Man Stories in the early 1940s. Richard Sale, who had better luck with series characters, has a Daffy Dill story this week, while Edgar Franklin has a novelette about a relatively short-lived series character, George Batey. There are also novelettes by Maurice Beam and Joseph Millard, stories by Bert Collier, William T. Bannon, Vincent Hall and Carl Rathjen, and a serial chapter from Fred MacIsaac. Plenty of variety, at least.
Posted by Samuel Wilson at 2:59 PM