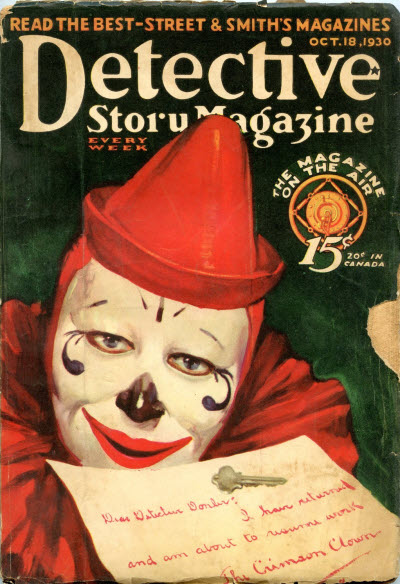 Do you find clowns scary? Many do, and perhaps Delton Prouse thought his red pagliacco suit and whiteface would strike terror into superstitious, cowardly criminals. Somehow it worked, and the mere idea of the Crimson Clown thrilled or at least amused Detective Story readers.  Still, Johnston McCulley had neglected him long enough for his first new story since May 1929 to be heralded as "The Crimson Clown's Return" in October 1930. Notice how the hero needs no introduction, apart from the letter he presents on the cover. Prouse would make three more appearances in the next year and then go dormant again, finally getting another "Return" in Popular Detective in 1944. The Clown aside, this issue has an unusual number of continued stories, though one of the three is only the conclusion of a two-parter. There are also four standalone stories, all by names mostly forgotten now.  One of the stories is "His Last Grin," which might make some clowns laugh.
Posted by Samuel Wilson at 1:50 PM