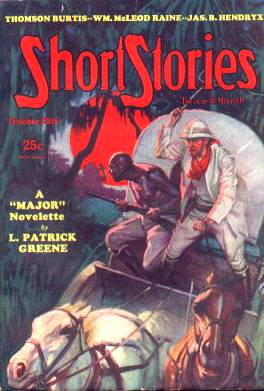 The 25th usually is Short Stories day each month, and today brings a Short Stories double feature. William Ruesswig painted this nice cover illustrating an adventure of Aubrey St. John Major and Jim the Hottentot in 1931 to promote L. Patrick Greene's latest, "Veldt Gold." It's a strong image I can envision gracing the cover of a future volume in Altus Press's planned complete edition of the Major stories. The folks at Doubleday, Doran liked the cover so much they used it again exactly two years later. 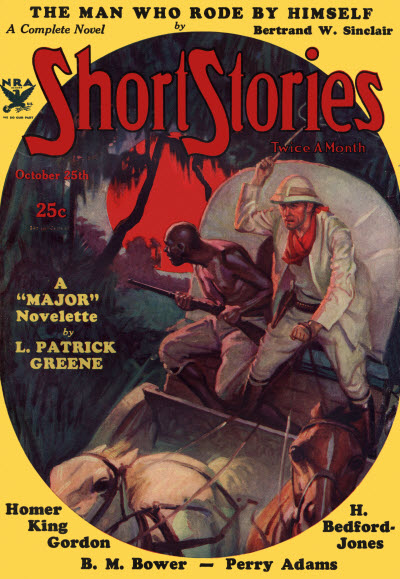 Which issue would I rather have? I'd have to say the 1931 if only because the 1933 issue has been scanned and disseminated to digital collectors already. Neither one is really an all-star issue by today's standards, though the 1931 boasts not only The Major but also James B. Hendryx's two Halfaday Creek heroes, Corporal Downey and Black John Smith, in the conclusion of the serial Corporal Downey Takes the Trail. A lot of people liked Thomson Burtis, too, though I've never really warmed to him.

You can't be too hard on Short Stories about this repetition, because recycling covers really was one of the very few economies the publisher imposed during the Depression. While the magazine's great rival Adventure fluctuated drastically in both page count and frequency, Short Stories chugged along relentlessly, putting out 176 pages twice a month throughout the 1930s and until 1943, excepting a reckless experiment of 224 pages at a time in 1932. You still got more content in a month's worth of Argosy weeklies and paid less -- 40 or 50 cents for Argosy as opposed to 50 cents for a month of Short Stories --  but you didn't get much better value anywhere else.
Posted by Samuel Wilson at 12:47 PM