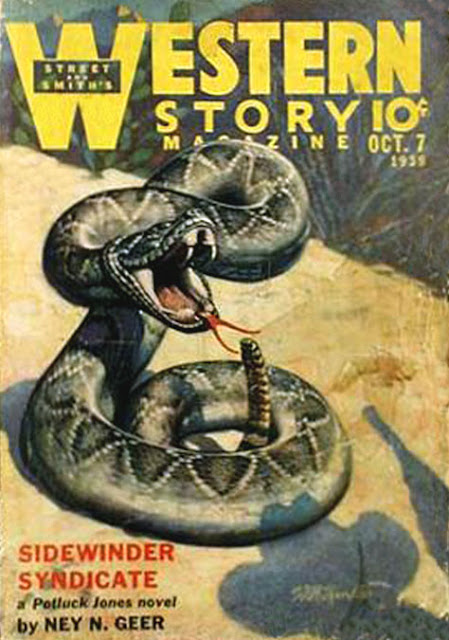 W. H. Hinton paints a thematically appropriate cover for this 1939 Western Story and its lead novella, Ney N. Geer's "Sidewinder Syndicate." I've had my doubts about "Ney N. Geer" but it proves to be the author's real name. Geer (1895-1974) had a relatively brief pulp career after starting late. He didn't publish his first pulp story -- or the first one the FictionMags Index is aware of -- until he was 41 years old. All his stories but one appeared in Street & Smith pulps. Geer's biggest success was his Potluck Jones series, as his being mentioned by name on this cover will attest. "Sidewinder Syndicate" is the exact halfway mark of Potluck's career, the seventh of his thirteen stories. He and Geer are joined here by old hand W. C. Tuttle, W. Ryerson Johnson, Wilfred McCormick and Cliff Walters, while Jay Lucas continues his serial Range of Hunted Men. The cover may well be the strongest thing in this issue, and it's a fine example of the Street & Smith aesthetic circa 1939.
Posted by Samuel Wilson at 2:07 PM