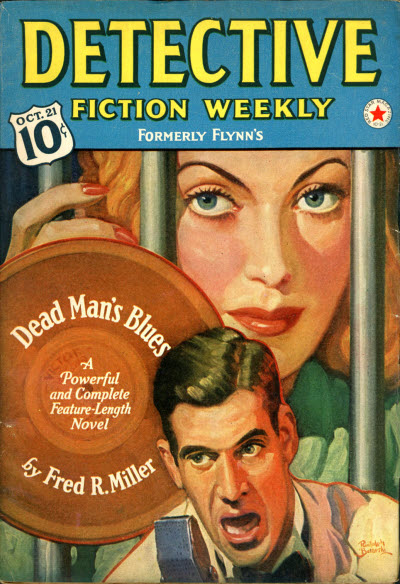 Fred R. Miller, the author of this 1939 Detective Fiction Weekly's cover story, dabbled in pulp only briefly. He published two stories in DFW, including this one, and another in a 1941 issue of True Gangster Stories. Miller has a more interesting history outside pulp. Earlier in the Thirties he had been the editor of Blast: A Magazine of Proletarian Short Stories, where he published his first fiction. Miller criticized better-known leftist literary journals for being too refined or genteel, so perhaps pulp was a natural next step for him. "Dead Man's Blues" also appears to reflect Miller's interest in jazz, which found aborted expression in an unfinished collaboration with the poet William Carlos Williams. As a poet in his own right, Miller made it into The New Yorker a couple of times. Along with Miller's alleged "Feature-Length Novel" -- it's only 27 pages -- there's a serial chapter from Walter Ripperger, a novelette by J. Lane Linkletter and stories by Robert Leslie Bellem (a rare foray outside the spicy pulps), Hugh B. Cave and Philip Ketchum. This issue may lack DFW's big guns, but it may not be without interest.
Posted by Samuel Wilson at 2:56 PM