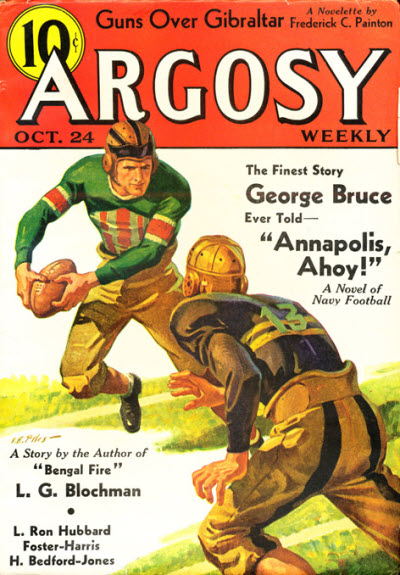 At least once a year, and usually in the fall of course, Argosy would run a football cover and a football serial. You could depend on a baseball cover and often a hockey cover as well, but I don't recall any basketball covers. 1936's football serial comes from an unusual source, since George Bruce had long been a "war-air" specialist whose name had been above the title of two different aviation pulps earlier in the 1930s. Bruce had done a few boxing tales for Fiction House's Fight Stories, but he really started to branch out at Argosy, having published a baseball serial, The Speed King, earlier in 1936. Whatever we think of the sports pulps today -- and my impression is that we don't think much of them -- there clearly were incentives for writers to work in that genre. Navy football is the subject of Bruce's serial, and eighty years later the Middies are an aspiring football power again, ranked No. 22 in the nation this week.There's no table of contents for this issue in the FictionMags Index, but we see that Frederick C. Painton has a novelette prominently featured, while L. G. Blochman, L. Ron Hubbard ("Deep-Sea Diver") and Foster-Harris have standalone stories. H. Bedford-Jones concludes his serial Raid of the China Clipper while Eustace L. Adams continues his three-parter Red Chaos at Night. One seller identifies Will McMorrow and L.U. Reavis as the other contributors. Whether Annapolis Ahoy! is "The Finest Story George Bruce Ever Told" is certainly debatable, but I'm unprepared to debate the topic.
Posted by Samuel Wilson at 12:59 PM