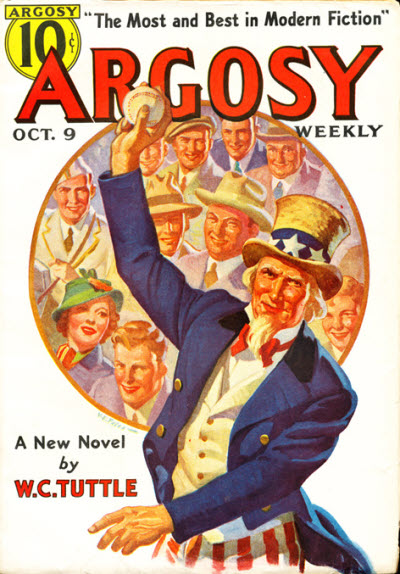 Nothing dated October 9 really impressed me visually, so I've chosen this 1937 Argosy as a matter of virtual vanity, as it portrays my pulp identity of Samuel Wilson, the symbol of our nation. Presumably Sam is throwing out the first ball of a World Series game, which would be further proof that baseball was a faster sport back them. They only played 154 games and the Series itself was the only playoff. Note that Sam is throwing the first ball, not the first pitch. This had become a presidential tradition earlier in the century, but it was still beneath a chief executive's dignity to actually take the field for the ceremony. Anyway, while the FictionMags Index has no table of contents for this issue, it was scanned and uploaded some years ago, and that enables me to give you some idea of what Sam was selling this week. 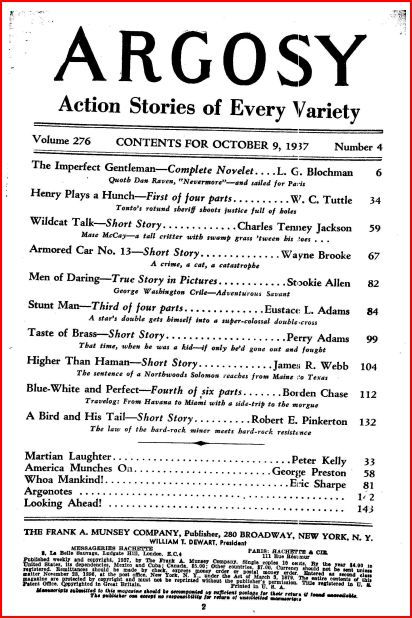 Two of the serials are really good. They're Borden Chase's Smooth Kyle story Blue-White and Perfect, which was later made into a Michael Shayne movie, and Eustace L. Adams' Stunt Man, in which the title character is obliged to impersonate the actor he doubles for in movies when the star gets into a jam. It's odd that Argosy went with a generic Uncle Sam cover when this issue started a Sheriff Henry serial by W. C. Tuttle, but perhaps a cover artist missed a deadline. The lead novelette is L. G. Blochman's "The Imperfect Gentleman," set in Europe rather than the author's more usual haunts. An American gangster on the lam wants to live like a gentleman in Paris but encounters the notorious "apaches," the hoodlum types immortalized by that violent pas-de-deux dance you see in so many comedy shorts and cartoons from these years. Perhaps you can hear the music in your head as I mention it. The rest of the issue, I regret to say, has faded from my memory after about three years. It either says something about the stories or it says something about me.
Posted by Samuel Wilson at 4:15 PM